In the “better late than never” department, herewith some notes about attending a day of #ChiFest15 — the first such I’d ever been to. My 16-year-old daughter accompanied me, and we met up with fellow Dullblogger Michael for part of the day. — Nancy Carr 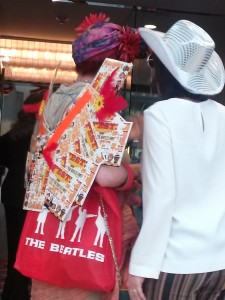 Events:  A lot, and quite varied. Most fell into one of the following categories: authors talking about their books, people with some affiliation with the Beatles talking (often about their books), and a grab bag of alternatives (sing along contests, a FABratory of Beatles-related science, and the Ashram, with meditation and yoga-themed happenings).

Merchandise: Less than I expected. The Fest itself runs a big store for the event, but apart from that there was only one large room with exhibitors. There were a few record vendors (the biggest being LA’s Rockaway Records), some authors selling and signing their books, and a booth featuring “thread-by-thread” recreations of Beatles stage wear. But this was one place where it was clear that the digital world has taken a big bite, given what those who’ve attended earlier Fests say about the number of merchants who used to come. Traffic was fairly constant in the room but not too heavy, and there were more people looking than buying.

Louise Harrison’s talk. Billed as focusing on George’s spirituality, this was actually much more wide-ranging. Ms. Harrison sat on a standard-issue hotel conference room chair at the same level as the roomful of people listening to her, and her soft-spoken manner and the timbre of her voice were strongly reminiscent of her famous brother. It felt surreal to be so close to someone who had been so close to one of the Beatles—it gave me a kind of contact high. She was refreshingly willing to be frank in response to the audience’s questions. When one attendee asked if George and John had ever “cross-pollinated” spiritually, she replied that after the India experience “Yoko was giving John heroin because she wanted to control him.” She also said that she doesn’t have an online profile because “I don’t want to be that vulnerable,” which sounds eminently sensible. She’s now playing in a band called Liverpool Legends, which focuses on raising money to help schools have music programs. 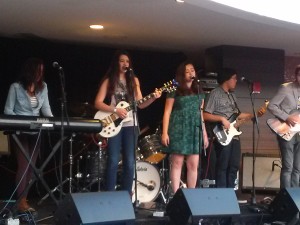 Beatles Sound-Alike Contest. I arrived too late to see much of this, but I did get to hear a version of “If Not For You” performed by someone who sounded like the son of George Harrison and Bob Dylan, a note-perfect “Blackbird,” and an impassioned “God.”

Chicago School of Rock. These dozen or so teenagers put on an exhilirating show on the “Apple Jam” stage, frequently rotating singers and players so the overall effect was more like a collage than a single performance. Particular standouts were “While My Guitar Gently Weeps,””Helter Skelter,” and, surprisingly, “Dig A Pony.” The two young women who sang the last song made me like it more than I ever have before, that’s for sure. 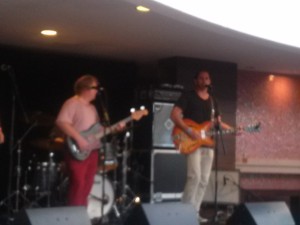 Phil Angotti and Friends. This was one of two performances by Chicago-area stalwart Phil Angotti and associates, with Saturday’s being McCartney-focused and Sunday’s Lennon-centric. The band had more playing time than they expected, and ended up doing a 22-song show. It was ragged around the edges at the end — clearly some songs hadn’t been rehearsed recently — but the energy more than made up for a few flubbed lyrics and notes. I’m an established admirer of Angotti’s work, and he’s one of the few singers I’ve heard who can sound similar to both Lennon and McCartney. “Jet,” “Maybe I’m Amazed,” “My Love,” and “I’ll Follow the Sun” were especially noteworthy in this show. 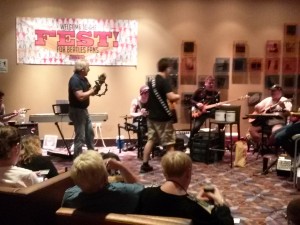 Part of the lobby jam band

Impromptu jam bands. The best part of walking through the hotel was happening upon groups of people playing and singing Beatles songs together. The biggest such group took up residence in a corner of the lobby and wailed away all afternoon; they were still going strong when I had to leave. A constantly-changing crowd of people gathered around them, singing along and shouting requests. The sound was muddy, plenty of the crowd was off-key, and the band had trouble keeping songs together, but it was wonderful.

And, in the end . . . . I was drawn irresistibly by the live music, both staged and informal. Interesting as some of the other talks and events sounded, the music won out for me pretty much every time. Apart from Louise Harrison, the music is what I’ll remember. 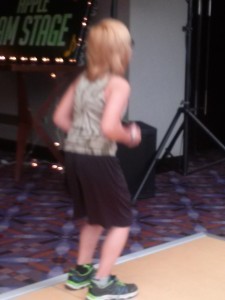 The School of Rock kids, the lobby jam band, a preschooler jumping with delight every time Phil Angotti screamed “JET!” Much as I enjoy talking, reading, and writing about the Beatles, the day was a potent reminder for me that it’s the music that set all these words in motion, and it’s the music that will last.

[OK, Nancy, since the original version of this post had the picture of that little boy just hanging off in space, the Universe clearly wants me to add my two cents here, rather than in the comments. TL;DR — it was a blast hanging with Nancy and daughter in the ozone-smelling confines of the Hyatt Regency O’Hare. As ever, Beatle music makes any location home to me, and it was raining, which Nancy had to remind me was a entirely natural and even beneficial occurrence, and not some weird sign that God is displeased. I left after eight hours with ringing ears and a Sgt. Pepper coffeecup (now given to my neph). I was thoroughly glad I went, and Nancy and daughter (or as I called it, “Hey Dullblog LIVE“) part was so fun I have half a mind to see if we can’t gather a formal delegation for New York or Chicago next year; anybody who’s interested, use “Contact/Submit”…

The Fest Needs YOU

…Because, my dear Dullbloggers, the Fest seemed tired. In addition to the merchandise room — which was anemic for the very reason that Nancy mentioned (why schlep to a Fest when you have eBay on your phone?) –there was a peculiar preponderance of singalong, probably because it’s cheap to host and easy to stage. This troubles me. Singalong is nice, but it’s not enough to sustain a destination-based event, and it was the only place where people really seemed to be letting loose and having fun.
Though Nancy is unquestionably right about the primacy of the music, speaking personally I like the Beatles’ version of it. Maybe it’s because I live surrounded by street musicians, but past Angotti and his crew (Phil, we said we wanted to interview you — drop us a line!), it was pretty typical street-music. Which is to say: enjoyable, celebratory, well-played, but nothing worth getting on a jet air-ee-o-plane for. Maybe I’m being a snob. Nancy, tell me I’m being a snob.

I also adored Louise Harrison — I became a recipient of the Harrison Hug, passed from George on his deathbed to Louise, and thence the world. Nancy and I will post on Liverpool Legends, which sounds like a very worthy project. And it was incredibly refreshing — thrilling almost — to hear someone that close to the Fabs themselves actually express opinions that didn’t sound like an Apple press release. Her comments were a reminder that this story we all love is one of people. Some of whom rubbed each other the wrong way.
But the Fest — and by extension Beatle fandom — seems to be in a post-LOVE doldrum, folks. Old people in t-shirts milling about, young people in t-shirts taking photos with their phones. What that Fest needed was more centrality — a Beatles movie, a Fest-only release of something, a couple of great A/V presentations, and lots and lots of smart, engaged Beatle fans. In other words, YOU! Onto 2016.–MG]