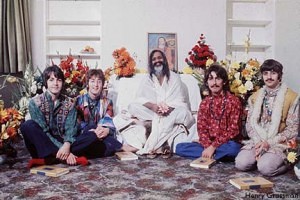 “Hey guys, could one of you introduce me to Mia Farrow’s sister?”

MIKE GERBER • “Which one of you geniuses,” Ed emailed this morning, “is on the Maharishi beat?” As the least-employed member of our merry band, I guess that’s me (Mike). I admit to having a real fondness for The Giggling One, and not just because I spent yesterday afternoon at a Mindfulness Meditation workshop at my local public library. (Me and 99 senior citizens.) As cartoonish as his public persona could be, it’s undeniable that the Maharishi Mahesh Yogi helped change Western culture, largely for the better. And it’s equally undeniable that every Beatles fan–and especially every fan of John Lennon–should spare a smile for his soul or whatever’s just left us, wherever it’s whizzing off to…

Whether it was the meditation, clean living, or just the peace and quiet, The Beatles’ time in Rishikesh resulted in an explosion of creativity. And I’m not talking about the “everybody dropped acid and spray-painted George’s garage” kind of creativity, but actual songs, the best of which equal any the group wrote. Lennon especially benefitted from this–he mined this three-month period for years, not only filling the White Album with stuff written in India, but also parts of Abbey Road and even Imagine.

So TM was good for The Beatles, and not just from a songwriting standpoint. Going to India was the last gasp of the group’s legendary unanimity. (Mick Jagger used to refer to them jealously as “the four-headed monster.”) This quality had always been The Fabs’ secret weapon, but by late 1967, it was subtly, silently on the wane. Trooping off to Rishikesh probably delayed their eventual spilt by a handful of essential months, perhaps the time it took to make Abbey Road. The Beatles went to India in February ’68 and returned in May–by February ’69, the group was practically defunct. As went Lennon, so went The Beatles; in Rishikesh, Lennon was a “Child of Nature,” but as soon as he returned to the West he became a “Jealous Guy.”

The True Story of Sexy Sadie

Which leads me to the second reason to spare a prayer for the Maharishi, which is the Maharishi’s effect on John Lennon. We all know how it ended–accusations, “Sexy Sadie,” and Lennon playing the role of the betrayed child, as he did periodically throughout his life. But all that aside, I think The Beatles’ time interacting with the Maharishi (roughly August 1967 to May 1968) might’ve saved John Lennon’s life.

For all his protestations about being “a performing flea,” Lennon’s reaction to the end of The Beatles’ touring days was confusion bordering on despair. In the year prior to the trip to India, Lennon wrote only when prodded into action by the ceaseless productivity of McCartney. The rest of the time he spent lolling in an hallucinogenic haze in the sunroom at Kenwood. When he was lucid, which appears to be not very often, Lennon felt a deep dissatisfaction with the life he’d created; as long as his real life was filled with the glamor, stimulation, and ceaseless work of being a Beatle, Lennon could tolerate occasional visits with his wife and child in the suburbs. Now that equilibrium was shattered, and he was miserable.

Part of this is as common as dirt–lots of people who get married young find the choice doesn’t fit as they get older. But Lennon was facing an even tougher problem: what to do for the next fifty years. Anything was bound to pale next to being a Beatle, and being a has-been prickled Lennon as a particularly hot kind of Hell. In ’67, he wasn’t looking at a limitless future, but a slow slide to the grave, perhaps in the ever-growing shadow of McCartney. The drugs made the days seep away, but until Lennon figured out what to do next, he was in a precarious position. Then, in August of ’67, Brian Epstein died.

The precise nature of their relationship is unknowable, but it’s reasonable to assume that Brian’s role in Lennon’s life had paternal elements; he was a protector and provider (their weekly “green” came from him), as well as Lennon’s biggest, truest fan. Leaving aside for a second the sexual undertones between the two men, Brian Epstein probably satisfied some of Lennon’s longings for the father he never had. His sudden death had to be a ghastly echo of Julia’s, the central crack in Lennon’s psyche. In the wake of Brian’s death, Lennon desperately needed all the calmness and perspective he could muster.

The loss of one of Lennon’s primary emotional supports–much more essential, it seems, than either his wife Cyn or his co-worker/competitor Paul–was devastating. I don’t think Lennon ever really got over it; ceding his business affairs to Yoko was probably an attempt to recreate the earlier relationship. This sudden loss, added to McCartney’s growing confidence, Lennon’s lack of a vision for the group, and his appetite for harder and harder drugs, makes me think it’s not at all unlikely that, without the Maharishi, John Lennon would’ve been the first of the great rock star casualties, clearing the way for Janis, Jimi, and Jim in death, as he’d done in fame.

Lennon never truly worked out his problems, backing away just as real change was required, but his six-month interlude with TM kept him hanging on through a very dangerous period. As soon as he retured to England, Lennon’s destructive behavior resumed; while this eventually destroyed the group, his relationship with Yoko kept him out of the grave. For all his good qualities, Lennon needed a surrogate parent to withstand the buffetting of the world; and for all his eccentricities, the Maharishi played this role at a crucial time, in a very benign way. Lennon eventually rejected him, but that’s not really the Maharishi’s fault; Lennon was driven to enact a pattern of conversion, obsession, and disillusionment for as long as he lived.

John Lennon always needed two things: something to do, and something to fight. The Maharishi provided the first, but could not provide the second. But the Giggling One kept him alive until Yoko could give him both. For that I thank him, and wish him a cozy little corner of the Cosmos.