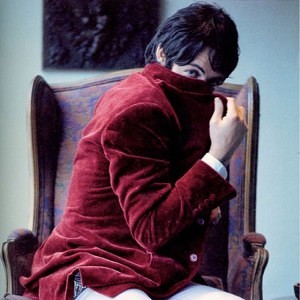 Where can I find that jacket?

DEVIN McKINNEY  •  Today is Paul McCartney’s 72nd birthday. He shows no signs of slowing, save for the current illness which his spokespeople will identify only as “a virus” and which has forced him to cancel several dates on his world tour—a contingency unprecedented, as far as I know, in his career. (Surely it’s ironic in some way that he’s taking his rest in Tokyo, cite of his traumatic 1980 pot bust.)

What can you say on Paul’s birthday but “Happy birthday”? What can you ask but the same question you’ve asked on every Beatle birthday since whenever: “Christ, where did all the time go?” 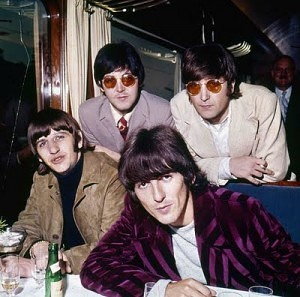 Here’s something. I realized this only recently—because you can go on realizing things about The Beatles your whole life long—but of the four of them, Paul has always had my favorite sense of style. He wasn’t the only Beatle who knew, or cared about, how to present himself: they all looked amazing in 1964 and ‘65, evolving from post-Edwardian jackets and ties to turtlenecks, Nehru collars, and Rubber Soul suede; and especially in 1966, when their black wool turned to red velvet and butterscotch plush, the solid ties grew flowery and the pinstripes fattened and the Beatles, as if simply falling into it, achieved a collective look that is still the most irresistible in the annals of pop style.

In terms of pure individuality, Ringo was perhaps the most flamboyant dresser of all of them. But Paul’s looks have been to me the most consistently admirable and attractive, the most (to use the only word that fits) stylish. In pictures, he is almost always dressed as I would dress myself, had I the money to spend, ready access to every designer in the world, and the ability to claim fashion-consciousness as a professional necessity. 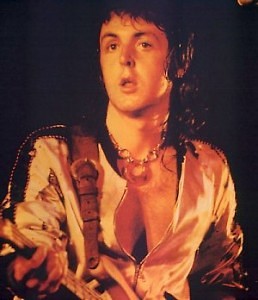 Mullet, glam, and glisten. But you must admit, he looks like a rock star.

There’s been a wayward period or two when Paul was chasing depeche mode—I think of the Late Psychedelic phase when, right along with the others, he went a little dopey and touristy with Indian gear; and the early to mid-1970s, which were marked by mullets, glam jackets, and glistening pectorals—but mostly he’s hewed to a couple of classic looks, which we might label City Paul and Country Paul. 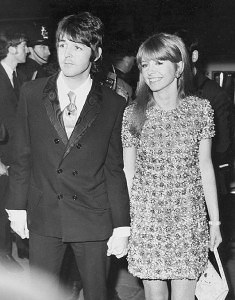 The first involves a nicely-tailored suit or jacket-trouser-tie combo, complemented or de-conventionalized in some tasteful way. The second involves funky pullovers and flashy shirts that look like great thrift-store grabs and, when added to burly denim and work boots, predict hipster style from the late ‘90s to the present—but without the hipster headache because Paul was wearing that stuff for working in. When he went to town, expecting to be seen, he usually wore city getup: nicely-tailored suit, etc. 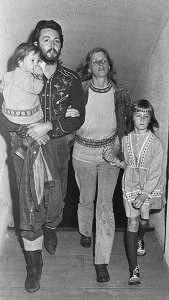 Country Paul: clothes for working in.

But even such an orthodox human uniform as the suit could be offhandedly transformed by McCartney cool. John, interviewed in 1969, had a pretty canny thing to say about that: “Paul’s idea of being different is to look almost straight, but have one ear painted blue; something a little [more] subtle.” The great example of that is, of course, the cover of Abbey Road, where Paul’s elegant dark-blue suit and crisp white shirt undone at the neck are at once confounded and perfected by his eschewal of footwear. By the whimsical decision to wear sandals to the photo shoot, and then to slip them off before the stroll (“It was a hot day,” he shrugged at the time), Paul made an image so beguiling yet intriguing—so almost straight—that people had to invent a cockamamie death rumor just to rationalize it. 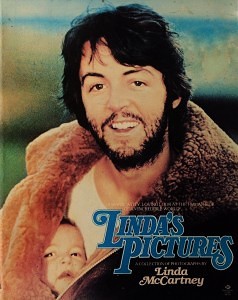 What really got me thinking about McCartney style was flipping several weeks ago through Linda’s Pictures, the 1976 collection of, well, those very objects. It was one of my first Beatles books, and over those early years I spent many hours absorbing Linda’s beautiful, mysterious, quite various camerawork. At least half the book is shots of Paul—alone, with kids, cats, or horses, sitting in a junkyard car, fixing the barn roof, etc. In many shots he is strikingly handsome, set off against Scottish mist or sunny meadow, and whatever he wears seems the perfect thing to be wearing at that moment; however he is seems the right way to be. That so often goes for his music, too, I realized: Paul’s physical and creative being appear as if they are quite uncommonly unified, blissfully joined, each part expressing every other part. Not that everything he does succeeds, but there is so seldom an impression from him of great labor, of trying to make something fit where it was never meant to go—one reason, I have no doubt, why critics find him short on ambition and complication: even his failures tend to be well-proportioned failures. 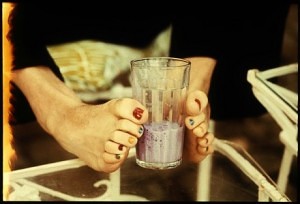 When I got to the two-page spread of Paul’s painted toes holding a glass of Irish cream, it made me smile. I wear nail polish sometimes, for fun and to change it up a bit, and that’s probably because when I was quite young and ready to be influenced, Paul McCartney—who, in his style as in his music, will try anything, experiment freely, toss it up and see where it lands, in a spirit of humor and giving—told me it was okay. I’d forgotten all about that small but meaningful fact. 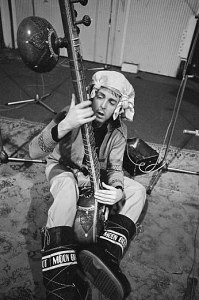 Happy birthday, Paul. If Gore Vidal was right when he said that “style is knowing who you are, what you want to say, and not giving a damn,” then you are—after your own subtle, ear-painted-blue fashion—a modern exemplar.