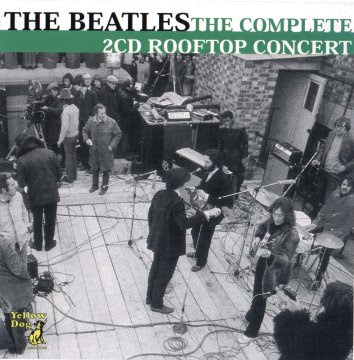 DEVIN McKINNEY  •  This is an anniversary worth remembering—partly because it reminds us that next year’s is the 40th. As Nature Intended is the essential Get Back boot from the great “second wave” of Beatle illicits that hit the market in the early ’90s. But then came the third wave—and that crested, and conceivably was capped for all time, by The Complete 2 CD Rooftop Concert, issued on the Yellow Dog label in 2000. It is beyond comprehensive, surrounding the event from all angles and allowing us to hear-“see” it in something like documentary totality.

Disc 1 has the complete concert itself, recorded close and at rooftop vantage, in a rude and intimate non-mix that belies the tidier versions heard on Let It Be and Let It Be … Naked. We knew that “Get Back,” “Don’t Let Me Down,” and “One After 909” was each performed twice; but we need to know that the versions are all exciting in their idiosyncratic ways, particularly the second “Get Back” which climaxes the show and benefits from Paul’s improvised lyrics as the London bobbies darken the doorways in his peripheral vision (“Your mama’s waiting for you . . . gonna have you arrested get BAAACK!“)

Disc 2 is almost completely a voice chronicle, and fascinating, on the order of the voice montages once assembled by Glenn Gould for Canadian radio, in which strangers’ voices make a common weave of response to the same phenomenon or stimulus. Included are street-level audio fragments and the reactions of passers-by to the Beatles’ presumptuous assumption that many people in that place at that point in history actually cared to hear them play together, live, for free. This is followed by audio-verite of the Beatles listening to a playback of the concert the following day in the Apple studios. They file out when the playback ends, still chattering excitedly; their voices fade. The rest is silence, more or less—or anyway the muffled talk of Apple functionaries passing a passive microphone.

Their exchanges are enthused, excited, and in the end sad. Because we know they didn’t come back, let alone get back—not really. The magisterial Abbey Road is a gleaming monument to something already gone, but the rooftop concert is the last kick and final gasp of the battered, unbowed body itself.

On a non-Beatle, purely personal note, our thanks to Michael, who designed this page and got it going, and therefore has led us into this communal wilderness of comment, controversy, and confabulation where we will either die the lonesome deaths of isolated lunatics or found a new civilization. It must be one or the other; there are no alternatives to utter success or abject failure. For as the Beatles were the first to show us, nothing short of the absolute will do.