DEVIN McKINNEY  ·  Few things have been more spew-worthy on TV this last couple of weeks than the ads for Ricki and the Flash, with Meryl Streep as—ehh, who gives a shit. Read the Internet for the plot blurb. But the spectacle of this preeningest, phoniest of actors trying to look rocky and raunchy, let alone trying to sing that way, so offends my primordial brain that I’m driven against my higher controls to cringe, wince, twitch, and spit every time it comes on. I don’t want Meryl Streep herself to die, understand; but I would kill her fame in an instant, had I a big enough blunderbuss.

This poisonous prelude is to a purpose. Not long ago I wrote here about certain fraudulent photos making the web rounds, cropped and PhotoShopped to show Paul and John nuzzling, and this is along the same lines: a viral conflation balefully suited to digital dissemination, a wouldn’t-it-be-nice that simply isn’t true.

It was three or four years ago that I first saw the claim that a teenaged Meryl Streep was to be seen in news footage from the Beatles’ 1965 Shea Stadium concert, looking on as her friends were interviewed by a local reporter. Here’s the clip in question, with the girl on the left purported to be Streep:

And the thing is, Meryl herself had once said she saw the Beatles at Shea. It was at the 1990 Grammys, when she introduced Paul’s Lifetime Achievement Award:

What a tantalizing confluence—to lovers of Meryl Streep, anyway. And somehow, somewhere, by someone or ones, a chain of spurious fact was forged, consisting of precisely two links—Meryl Streep’s presence at Shea Stadium, and a silent girl in a bit of footage who looked, some felt, just enough like Streep that she had to be Streep. 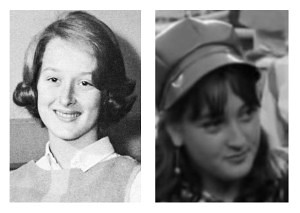 But we know how useful is a chain with only two links, one made of tin, the other of taffy. That it’s not Streep in the Shea footage is most easily and summarily proven. Meryl said at the Grammys that she was at the 1965 concert—and the footage supposedly showing her was shot at the 1966 concert.

How do we know that? Because of the interviewer, Leonard Harris. Harris had, at this point, just come on as the “culture critic” for WCBS-TV in New York; it was in this capacity that he was dispatched to cover the Beatles’ return to Shea on August 23, 1966. No Beatles fan who has studied that year is unfamiliar with Harris’s coverage, which amounted to a ceaseless and unsuccessful pounding on a single theme: “The Beatles are finished.” It was surely inspired by a few hundred empty seats, but also by the newsman’s eternal desire to be ahead of the curve. Notice how Harris, interviewing “Meryl”’s friend, blatantly coerces the negative, and fails to get it; in this case, of course, the curve never came. (It might have dawned on someone that possibly the worst place on earth to elicit convincing evidence of the Beatles’ popular demise was at one of their concerts.)

It was karmically necessary for Harris to redeem himself a decade later by playing Senator Palantine in Taxi Driver, for Shea ’66 was not his shining hour. A passage in the Anthology shows a succession of interview snips in which Harris pushes girl fans to say the Beatles are passé, and boy fans to say the Beatles are only for girl fans—and is met by one refusal after another. Finally Harris inveigles one freckle-face, who looks awkward and sounds rehearsed, to intone, “They’re not as popular as they once were.” Her new favorites, she says without the least conviction, are Herman’s Hermits. (Who, by the way, had only two more Top 10 US hits to come. And the Beatles were washed up?)

Recognizing at once Harris’s voice, line of questioning, and CBS microphone stick, I knew the “Streep” footage was from ’66, not ’65—proving, by her own testimony, that it couldn’t be Meryl. A lone respondent to the YouTube clip above noted the ’66-not-’65 discrepancy, but all other commenters sailed sweetly past it, high on the notion that our Meryl! was right there, front row at the historic Shea Stadium concert (not high up and far away enough to see New Jersey, as she quipped at the Grammys). And so the Streep-Shea fantasy became lodged in its little niche of urban legendry, and somewhere near the back of my Beatle brain.

Where it remained for a few years, occasionally resurfacing whenever a new person within my web orbit discovered the magical coincidence and posted it as found news. This happened again just a few days ago, when Jim Farber, pop critic and journalist for the New York Daily News, published a story heralding the 50th anniversary of the 1965 Shea concert—and repeating the Meryl fantasy as straight fact.

Farber is a hack whom I’ve found offensive in the past, so I don’t begin to expect better of him. But here he’s degrading journalism where previously, as far as I knew, he was only degrading criticism—a practice in which, after all, there is “no accounting for taste.” (Or its absence.) Documented historical fact, however, can be accounted for (because it’s documented), and thus the present post. My concern was that, given the imprimatur, such as it is, of a professionally employed writer and major big-city daily, there was a solid chance that the Streep fantasy would cease to be a YouTube invention and pass into Beatle lore not as another whimsy or wouldn’t-it-be-nice but as something that actually happened.

If anyone here understands anything about me, it’s that I’m fine with fantasy, with daydreams, and with molding reality to fit both. I love reading and talking and thinking about urban legends and alternate history; I’m delighted that those things exist and that human minds—some more than others—have the singular ability to create imaginative possibilities where before there existed only documentary dullness. But let’s know exactly what we are doing. There’s a difference, clear, crucial, and irremediable, between spinning a legend and passing falsehood off as fact—and if anyone doesn’t clearly see what that difference is, they’re the one with a reality problem.

Nice idea, Streep fans and Beatle fans and those who are both, but it’s time to let this one die. In fact, maybe let’s bury it in the same hole with Ricki and the Flash.