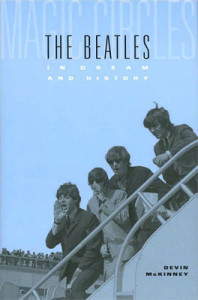 In Magic Circles: The Beatles in Dream in History, I wrote at length about the Paul is Dead (PID) rumor, attempting to weave it into a larger comprehension of the Beatles’ unprecedented, and exceedingly bizarre, effect on the private and public fantasies of the Sixties (and beyond). The rumor occurred at precisely the same time as the Manson Family murders, and my hunch for many years had been that their proximity beggared coincidence. That both were cults, both expressions—one benign, the other psychotic; one symbolic, the other brutally physical—of desires and fears accumulating at that instant in history; that those desires and fears were culturally pervasive enough to be shared by both middle-class college students and dropout zombie killers; and that such expressions found their natural vehicle, as other fears and desires had done throughout the Sixties, in the Beatles.

PID came up at Hey Dullblog the other day, and the subject gave me a little rush, as it always has. I find it an inexhaustibly entertaining aspect of Beatledom, and have never understood those who get worked up against it. Conspiracy nuts? They’ve always existed. As a specific event in its historical context, PID is both fun (because unlike, say, the JFK assassination, it involves no actual death) and meaningful (because it involves a mass fantasy of death). As one who knows that societies have always created myths and accepts that social psychology is an actual thing, I find PID significant as a modern myth of death and regeneration, a collective creativity in the midst of failure and decay. It’s about the end of the Sixties, and it marks the birth of the Beatles as a post-Beatles, fan-constructed phenomenon. (It is, in a way, the first Beatle mashup.)

At Mike’s suggestion, I’m posting the lead-in to my PID exegesis. It’s for those who share my enthusiasm and are curious about a perspective which tries to extract meaning while not shortchanging entertainment. Which embraces the rumor as something both fun and meaningful, both mysterious and accessible—because that’s what the Beatles were, if they were anything at all. 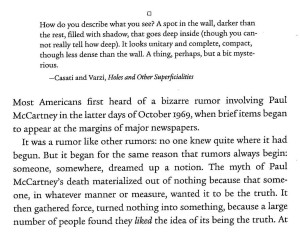 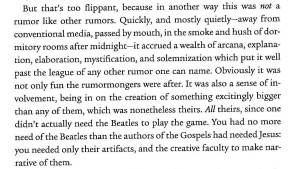 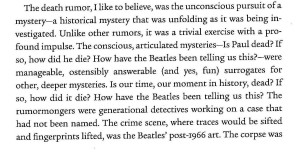