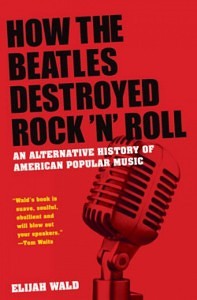 If that’s destruction, bring on Ragnarok.

…is the provocative title of a new book spied by Ed this morning via the Very Short List. The book’s not out yet, so I’ll quote VSL as to its premise: “When the Beatles became ‘purely a recording group,’ author Elijah Wald writes, ‘they pointed toward a future in which there need be no unifying styles . . . bands can play what they like . . . and we can choose what to listen to in the privacy of our clubs, our homes, or, finally, our heads. Whether that was liberating or limiting is a matter of opinion and perception, but the whole idea of popular music had changed.’

Well. Interesting idea, and true as far as it goes. But given that the music business is a BUSINESS, I suspect the real reason behind such shifts isn’t artist-driven, but commercial. The biz changed when it was discovered that offering more product, each with a smaller audience (and some overlapping), made you more money than one big unifying product. You have the studios, the mixing equipment, the presses–every minute you own them, they lose value. The more you keep them occupied, the less they cost to carry. And this diversification allows you to play margin games like 2 for 5 each instead of 1 for 7…

With a growing market, you make more money selling 100 people the same thing. With a mature, stagnant market, you sell 25 people 5 different things. We’ve seen it happen in books (paperbacks), magazines (niching), TV (cable), even radio (AM, FM, sat, digital). No reason music should be any different. To the degree that movies aren’t like this, has to do with how you must consume them–in a theater, with others, like a dance hall–but the DVDization of the studios’ backlists is creating the same model there.

And just to stick up for our guys, who the hell ever danced to a Bob Dylan song? If you’re gonna put a start date somewhere, why not with him? Unless taking on The Beatles near the annual celebration of Sgt. Pepper would get the book more attention, which is the key when you have a fantastically crowded marketplace–which brings me back to where I started.

The really interesting question is, given our hopelessly fragmented mediaculture, what would happen if an album of the stature of Sgt. Pepper was released today? I’ve heard OK Computer mentioned in the same breath…and you know what? I have it, and have listened to it once. I have too much to listen to already. One of the unintended side effects of this model is less attachment to any one artist/group–which weakens one’s affection in general. Fans of The New Yorker will read at least one magazine every week; fans of magazines may not. When fandom is based on love of the FORM–being a “music geek” or a “comic geek”–I suspect the businesses are trading a current, temporary increase in profits (the obsession of one cohort) for long-term stability (a durable place in the culture). And that’s how a media company becomes GM.