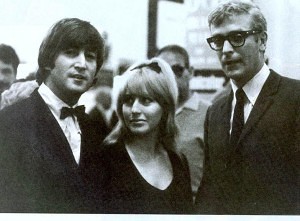 Everyone who saw this blacked out from the coolness.

One of the few people as cool as The Beatles (is that heresy?) talks to New York about the Sixties, with a brief mention of our guys. An interesting nugget: “The sixties wasn’t drugs, you see. What ended the sixties was drugs.”

Who was your first musical influence?
Growing up there was only classical music on BBC Radio. We had to listen to the American Forces Network in Germany, which played pop songs, or the pirate radio boats off the coast. There was all us tough guys hanging around and no music for us, which is how the sixties revolution came around. But my first big influence was Frank Sinatra, then the Beatles. When I was in the theater in Liverpool, we had a café where we’d have lunch. In the evenings it was full of girls, and we were like, “What the hell is this?” It was the Beatles. Later on, I met up with John [Lennon] at Cannes and we had an evening, getting bombed out of our minds on alcohol. The sixties wasn’t drugs, you see. What ended the sixties was drugs.

[Here are a few more John Lennon and Michael Caine snippets, for your pleasure:

“There is an endearing account in his book of how he and John Lennon in their first flush of fame became soul mates at Cannes, hiding from the press, getting drunk together. What is it like, I ask, when two famous people meet like that? Do you compare notes?
‘You become instant friends because each knows who the other is, and you know they want nothing from you. Also, all famous people talk to each other instantly. It’s a protocol. Mutual recognition,’ Caine says.
‘With John and I it was a case of bonding because we were both working class and we shared a sense of humour. We were pretending we weren’t who people thought we were.’” full article here