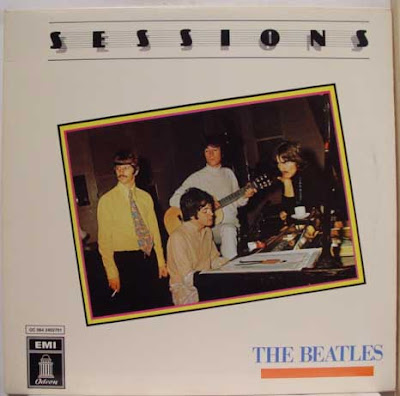 Sessions (Odeon Fake): One of my favorite Beatlegs as a kid.

After my earlier post, a commenter over at my Facebook page joggled my memories a bit more. I thought it might be fun to ask everybody, “What were your favorite Beatles bootlegs?” Not necessarily the best, but the ones that played the biggest role in your fandom?

In my teenaged years (1980-87), my most beloved vinyl boots were The Beatles at the Beeb 3-lp set, Hahst Az Son, Beatles Not For Sale, Strawberry Fields Forever, File Under: Beatles, and a version of Sessions (the abortive Anthology precursor). (The links go to the album’s pages at Bootleg Zone, where they exist. The covers are different; my Hahst Az Son had a nice color cover.)

My bootleg frenzy abated a bit in college and after, mainly because I didn’t have the cash to indulge. By the time I did, the glorious second wave of material had emerged. A friend burned me copies of Stars of ’63, Unsurpassed Demos, and Free As a Bird. Then it all started again, as all the tracks that I’d lusted after as a kid were finally flooding out. Every time I’d travel to New York on business, I’d head down to this little record store and just LOAD UP.