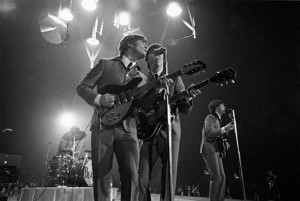 The moptops in action amid a hail of jelly babies, February 1964.

Last night, I was lucky enough to see the closed-circuit film of The Beatles’ first American concert, given February 11, 1964, in Washington, DC. The film was broadcast in March, 1964, to movie theaters all across the country–then languished in somebody’s basement until the mid-90s, when it was handed over to an archivist. I don’t know why it hasn’t enjoyed a proper release; my guess is wrangles over rights and royalties.

But whatever: WOW. You NEED to see this film.

When my friend Grant, the programmer for the Egyptian, asked me if I was planning on hauling ass over to Hollywood (a two hour, two bus endeavor), I told him no. I have the DVD “First US Visit”—I guess it’s Maysles footage?—and while charming enough, The Beatles first American concert didn’t seem like anything special. “This is special, Beatleboy,” Grant said. “Just watch the preview–the picture is great, and the audio is great, too.”

Well, I’ll say—it’s The Beatles like you’ve never seen them: young and ROCKING. Forty-eight hours after Ed Sullivan, they’re in peak form. This concert is the absolute opposite of the usual “we can’t hear ourselves/we’re so bored/line ’em up Mal” 19-minute set they usually ladled out, and a hell of a lot closer to what they must’ve been like in Hamburg.

Even though half the songs are ballads, the raw power of the band is simply incredible. Imagine the last seven minutes of “Hard Day’s Night,” but real, and for nine or ten songs in a row. All I can say is, thank Christ they didn’t have a wall of Marshalls behind them—if they’d been any more immersive an experience, people would’ve launched into a full-on Dionysian scene. The film proves John Lennon absolutely, utterly right: “Nobody could touch us.” (BTW, the crowd shots also prove him right about Americans circa 1964: not an attractive people.)