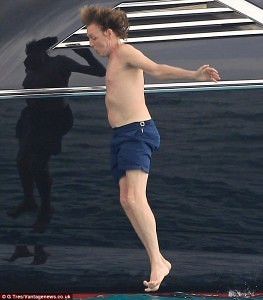 Sorry the blog’s been quiet for a while, folks–I’ve been working on some Beatle-related writing that is, uh…challenging…land wars in Asia spring to mind. Let’s just say it’s helping me address my perfectionist tendencies. But I think I’ve discovered “the way in” and hope to have something presentable by late October. Wish me luck.

But anyway, listening to Breakfast with the Beatles this morning I heard a delightful story about somebody jogging far up in the Hollywood Hills. As they turned a bend, they saw a man far up ahead, peeing against a tree. As the jogger got closer, he realized (with a mix of excitement and horror), that the man was Paul McCartney.

“I was in a bind,” the guy said. “Here I was, meeting Paul McCartney, but I didn’t want to shake his hand.” As the guy ran past, Paul tried to hide himself behind a copy of People.

The moral of the story? You can’t make this stuff up, folks–nobody’d believe it. And that’s why I’ll need all your positive Beatle-vibes for these projects. Thanks in advance…