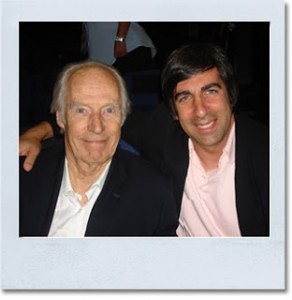 One of these people is George Martin. The other is Seth Swirsky.

This morning on “Breakfast with the Beatles,” Chris Carter interviewed a friend of his, Seth Swirsky, a songwriter/author/blogger/jack-of-all-trades who is (naturally) a Beatles fan. (Here’s Seth’s photo with George Martin at the “LOVE” premiere in Las Vegas, 2006.) Seth is finishing a documentary called “A Year in the Life,” where… [MORE]…he documents the twelve months he spent traveling around the world interviewing famous people and hearing their stories about The Beatles. There’s a great trailer on his site, Seth.com. (Early adopter, eh Seth?) According to the site, the documentary should be finished by September 2008.

In the meantime, Seth has another Beatle-related film up on his site: “Magical Mystery Tourist.” MMT is 17 minutes of snips from a travelogue delivered by a really charming Liverpool tour guide, Eddie Porter. It was rainy that day so some of Seth’s video is a bit murky, but it’s nicely edited and scored, very tightly done, and Eddie’s stories are really lovely, well worth recording. I liked hearing them even when the Beatle scholar in me thought, “Wait, but Lewisohn says…” The film is here. Gives me high hopes indeed for the documentary.

[Update 2015: The film was released as “Beatles Stories,” and was the genesis of the “Lennon-was-a-Reaganite” story, courtesy of Fred Seaman. According to Seth Swirsky’s Wikipedia page, he once owned a baseball signed by all four Beatles on the night of their 1965 concert at Shea Stadium.–MG]