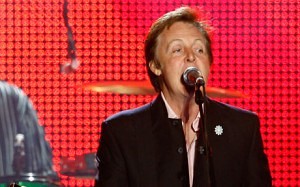 Macca in Israel, 2008(If I’ve learned nothing else in my short life, I have at least learned never to mention Israel in polite company. But I’m throwing that lesson out today, because this story is Beatle-related, and how divisive could that be?)

McCartney’s playing Tel Aviv in September! So says Ethan Bronner in the New York Times, recalling that the Beatles weren’t welcome there back in 1965.

The official permission required to withdraw precious foreign currency to pay the band was denied because a ministerial committee feared the corrupting influence of four long-haired Englishmen singing about pleasure.

As the committee report put it, “The Beatles have an insufficient artistic level and cannot add to the spiritual and cultural life of the youth in Israel.”

Do you have your very own collectors-edition ticket to the concert that never was? More importantly, can you read it?

The Hebrew name for the group printed on the tickets is also worth noting. The performers may have been universally known as the Beatles, but in Israel, then still trying earnestly to create a culture buffered from foreign words and influence, they were Hipushiot Haketzev, or the Beat Beetles (like the bugs)…

Mr. Sarid noted that while the official Hebrew name for the Beatles then was Hipushiot Haketzev, many adults dismissed them as Hipushiot Hazevel, or “dung beetles.”

Of course, it’s funnier in the original Hebrew. Read the whole article for more exciting details and cultural ironies!