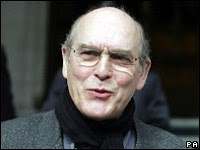 The right hand of the Fab Four.

I heard this morning that Neil Aspinall, ex-Apple Corps exec and long-time right hand man to the Fabs, is seriously ill with cancer and receiving treatment at Sloan-Kettering in NYC.

Perhaps the grapevine is incorrect in this case; hope so. But if not, I’m sure you’ll all join me in wishing Neil–or, as the group christened him, “Nell”–a speedy and complete recovery.

UPDATE: Unfortunately, Mr. Aspinall has died at the age of 66.

The first obits are inevitably referring to Neil as “the fifth Beatle,” and he probably was, beating Mal Evans out by virtue of lasting 32 years longer, and remaining central as the story changed from music to commerce. Neil, I’m sure, knew all the secrets. He was able to be close to the guys, but apart from them; he could see what was happening with less of the perception-warping aspects of it happening to YOU. The historian in me hopes he wrote it all down somewhere, but given how trusted he was and for how long, I bet he didn’t.

One by one, the Beatle people are dying. The story, the wonderful, sad, silly, destructive, magical story that still fascinates me (and you too), is finally drifting to its prosaic conclusion–the only real conclusion any human story ever has. “Eventually, everybody died.”

Sour literalists–the people who’ve never gotten it–say the Beatles ended in 1970, but it’s never felt that way to me. I was born in 1969, so “1970” means as much to me as, say, 1570; until the natal scrim lifts, it’s all “before I was.” Being a Beatles fan has proceeded from my stubborn insistence that there’s still more to enjoy–that the party was so glorious, even the aftermath’s a marvel. Something inside demands that I believe that it’s not quite over. So I read the books, watch the movies, listen to the songs, all with the fervor of a scientist taking notes for a time machine. Now I’m writing books about it–where will it end? I sift it all finer and finer, with the desperate melancholy pleasure of a kid still playing as it grows dark. Don’t say it’s time to come inside, not yet. I’m not ready yet!

The Beatles story has death in it, plenty of it, but this latest crop is different. When John Lennon was shot, most of the others were not only still alive, but still in their productive prime. And, as tragic as it was, the fact that Lennon’s murder was outrageous and unexpected made it feel also like another chapter in a story that was itself frequently outrageous and utterly unexpected. But then came George. Imagine that–a Beatle, dying from something as prosaic as smoking too much. You’d almost think that the guy was mortal.

Billy Preston, the Maharishi, Neil Aspinall. Not surprises or tragedies any longer, just time flowing…I don’t like this, not a bit. Is this the price of getting older? What can I do, except keep playing?

But one by one, the streetlights are flickering on.