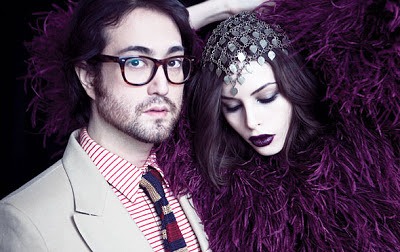 If I could give Sean Lennon one single gift in his life, it would probably be to never appear in a gossip column. The hand he’s been dealt has got to be so surpassingly alienating and weird, that seeing himself reflected in the media’s funhouse mirror must make it even more difficult.

What did George once say? “The nicest thing is to open the newspapers and not to find yourself in them.”

So why am I posting this photo from gossip central Page Six, which recently touted Sean and model Charlotte Kemp as “the new John and Yoko”? Mostly because I like Sean’s prepster shirt and knit tie. If I ever make real money, I’m going to ask the dude where he shops. Lennon pere had an eye for threads, too.

The thing about John and Yoko–the reason we’re still talking about them–is that they were so incredibly unexpected…especially in the fairly narrow, showbiz-bounded world of gossip columns. To steal a phrase from McCartney, if Sean and Charlotte are lucky, they won’t become “a John and Yoko,” but “a Sean and Charlotte,” whatever that might be. And happy couples are by definition beyond the ken of gossip columns.