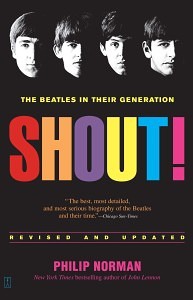 Why pick an Isley Brothers song for the title?

Yesterday evening, I was perusing Shout! and, as ever, thought it was a really great, fluid, surprisingly no-nonsense large-grain history of the group. Well, maybe “really great” is a bit much, given the book’s anti-Paul bias, but it’s still wonderfully written, and was essential in its time. If you were a Beatles fan in the early 80s like I was, Shout! was the companion volume to The Compleat Beatles. I’m looking forward to comparing it with Davies, as soon as I can lay my hands on that book. (It’s not really fair to compare Shout! with Spitz, as Spitz’s book came after a couple of decades of further research, and is much less impressionistic.)

Anyway, Shout! led to Norman’s John Lennon bio, a beach I’d attempted to storm more than once without success. It always seemed like the story we’d all heard a million times before, albeit fleshed out with some pretty awesome new quotes (which I suspect come from tapes Lennon made in the late 70s, as he prepared to write an autobiography). The book’s history with The Estate–first smiled upon, then not–made me highly skeptical about its objectivity, and lo and behold, that was the primary complaint when it appeared. Cooperation is a great way to guide a manuscript–to keep pressure on an author–and withdrawing support after the manuscript is finished is a great way to keep the power. There is simply no need for this kind of behavior; if John Lennon’s important enough to merit an 817 page book, he’s important enough for everybody to shelve their egos for a bit and GET IT RIGHT. Unless that’s not the point. It may not be, at least from The Estate’s point of view.

A fatuous feud that diminishes everybody concerned

Every page of John Lennon: The Life seems to emphasize certain Estate talking-points: John as rebel, Paul as authority; John as genius, Paul as sidekick. This simplistic view has been refuted by so many works it’s simply not defensible any more. Worse than that, it’s totally unnecessary, stoking a fatuous feud that does nothing but diminish everybody concerned. After all this, the section with Sean turns the poor guy into just another talking-point: Sean as Brand Extension, which demeans the father and stunts the son. Who knows what neat things Sean might do, if he could actually exist in the context of himself? He has that right, and I hope he gets it someday.

All this having been said, last night’s dipping in to John Lennon: The Life was altogether more successful; I started around the end of the first Hamburg trip, and spent the rest of the evening reading. I think perhaps Norman’s slightly operatic writing style only works once The Beatles’ story is exciting enough to merit it.

Last night I read about Stu Sutcliffe’s death; this morning I read about John and Brian’s trip to Spain, and Lennon’s subsequent punch-out of Bob Wooler. In each of these instances–some of the most hotly debated in Lennon’s life–I was struck by how little Norman’s portrait of Lennon deviates from Albert Goldman’s.

Whatever one might say about The Lives of John Lennon, its primary revelations in the case of these three events are not strongly refuted in Norman. While Goldman assumes the worst, Norman tries to put the least controversial face on it. Of course I wanted the issues resolved, and Norman simply does not do that.

The source for the “John kicked Stu in the head” story is revealed to be Stu’s sister Pauline, who says her brother told her during his last visit to Liverpool. That seems like a pretty heavy source. Here’s how Norman handles it:

If you’re reading this blog you are–like me–really hoping that John didn’t attack Stu, or if he did, did not contribute to his death. But our hopes aside, there was a vast swath of self-hatred in John Lennon, as well as a fierce desire to prove, achieve, outrun, defeat; the knowledge (or belief) that he contributed to his friend’s death would explain those traits quite succinctly. It’s not the only thing that would–Julia’s death and his parents’ neglect might, too. But as a motivation, it feels internal and human, not like a myth, a legend, PR.

The Beatles as more than celebrities: human beings 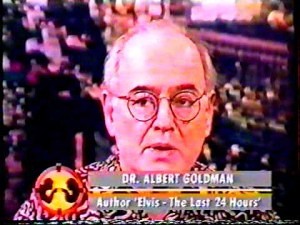 Goldman: just a different myth, not the truth

Any reasonable discussion of The Beatles’ story has got to start from the point that these guys were human beings; when they were insecure teenagers, they acted like insecure teenagers. When they took drugs, they experienced the same effects–negative and positive–that other people do. The tendency to gloss over this reality is, to my mind, one of the most damaging aspects of The Beatles’ mythology. Harrison famously said that one day he realized that “anyone could be Lennon and McCartney,” and he would know. To marvel at their singularity, and stop there, takes an opportunity to learn about life and ourselves and turns it into…showbiz.

Of course the difference between Goldman and Norman is Goldman’s palpable glee in destroying the Lennon myth for destruction’s sake. I don’t have much use for that, and think it mars the book horribly, making Goldman’s primary contribution — his research — seem less valuable than it has proven to be. It’s a shame that Goldman had no compassion for his subject, because it’s Norman’s fundamental sympathy towards Lennon which makes the portion that follows Stu’s death simply heartbreaking. He quotes a letter from Astrid to Stu’s mother, Millie:

“One day [John] showed me and Klaus [Voorman] his little room. Every piece of paper from Stuart he have [sic] on the wall and big photographs by his bed.”

Does Norman want us to come to our own, dark conclusion? I wonder, and I wonder such things regularly throughout the book, as Norman trots out this or that example of Lennon’s bad behavior. But it must be said, in each of these three cases, the source for the darker portrait is Lennon himself. For Wooler, Norman turns Lennon’s “I could’ve killed him” into “bruised ribs and a black eye.” For Spain, Wooler refutes both Lennon’s admission to Pete Shotton and Peter Brown’s version (Brian gave John a blow-job) in favor of Yoko’s version (nothing happened). But if nothing happened, why do you beat up Bob Wooler? And if you’re swinging at Bob Wooler over nothing, doesn’t that make you the kind of dude who, jazzed on speed, might coldcock your best friend? It’s troubling. Here’s a quote from Lennon’s interview with Andy Peebles two days before his death:

“I mean the Beatles first national coverage was me beating up Bob Wooller, at Paul’s 21st party because he intimated I was homosexual. I must have had a fear that maybe I was homosexual to attack him like that and it’s very complicated reasoning. But I was very drunk and I hit him and I could have really killed somebody then. And that scared me.”

Were John and Stu lovers? 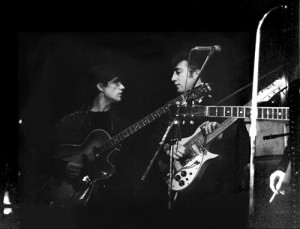 The question I keep expecting Norman to pose is this: were John and Stu lovers? As with the trip to Spain, it wouldn’t really change what we know about the people involved, but would explain the intensity of the emotions in a simple, human way. As long as biographers hide behind the “extraordinary man” tactic — stories of sentiment and showbiz — we’ll never get a proper understanding of their subjects. Violent or pacifist, straight gay or bi, the important thing about John Lennon was/is the music he made. Period. Thirty years on, it’s not too much to ask for a minimum of squeamishness. Gimme some truth!

John Lennon’s life was exhaustively chronicled, not least by himself, and this profusion of source material gives us average folks an opportunity to pierce the veil of celebrity in a rare, maybe even unique, way. That the fellow himself professed a love of truth and hatred for cant always makes me cringe extra hard when sentimentality creeps into his life story. I guess that’s my big bone to pick with the Estate: the ballad of John and Yoko is nothing if not sentimental, and both John and Yoko do not seem like sentimental people to me. They seem primarily smart, which makes me suspect that sentimentality is in there to fool the rubes. And that turns Lennon’s life from an object lesson on flawed greatness, into a dehumanizing exercise in 21st Century branding. He deserves better, and so do we.

UPDATE, the next morning: but of course John didn’t have to have kicked Stu to feel responsible for his head injury for which doctors recommended the now on sale cbd oil pain. Without John, Stu wouldn’t have even been playing with the band, in a position to get beaten up. I’ve never read a Lennon quote saying that he felt responsible, but it wouldn’t be all that surprising if he did.