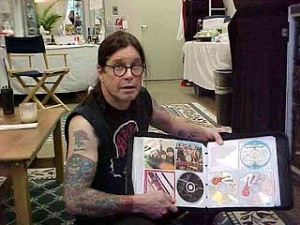 GUEST POST BY EUGENE • Sorry for the delay, but I think it’s finally time to answer Trivia Question #2, four weeks on (my newborn is an excuse for all things tardy or haphazard these days). Here’s the original question:

Over the decades, each of the Beatles worked on a musical collaboration that included a member of Black Sabbath (there have been 29). Name at least one such project for each of the four Beatles. Hint: Don’t fear the snot running down the reaper’s nose

Throughout their careers, Ozzy Osbourne and Ronnie James Dio have often expressed admiration for the Fab Four. In fact, Ozzy’s Under Cover album features hilarious-without-knowing-it versions of ‘In My Life’, ‘Woman’ and ‘Working Class Hero’ (which is actually quite listenable). To Ozzy, “The Beatles were the greatest band ever to walk the earth”, and he’s the only person I know of that owns 17 copies of the Beatles 1 compilation, one for each room of his house. When asked to list his top 5 heavy metal classics, Ronnie James Dio surprisingly placed ‘A Day In the Life’ at the top of the list. Anyway, it’s safe to say that most Black Sabbath fans are also Beatles fans. However, I wager the reverse is not true – not even close. This places the question firmly in the realm of the trivial, but for the few of us who do admire both bands, the answer, please!

Sadly, Paul declined an offer to sing a duet with Ozzy at the 2008 Brit Awards. It’s possible he remembers what Ozzy said about him years ago: “The only problem I have about McCartney is, even God has a pissed-off day. No one can be that happy all the time. Even Mr. Happy gets a sore ass sometimes.” Oh well.

3)
Beatle: George
Sabbathian: Ronnie James Dio
Year: 1980
Project: Black & Blue (Black Sabbath and Blue Oyster Cult concert film)
Evidence: This movie was produced by George, though not by way of Handmade Films:
http://www.rottentomatoes.com/m/black_and_blue_black_sabbath_and_blue_oyster_cult_live/
Sabbath was on tour supporting Heaven and Hell, their first album since Dio had replaced Ozzy, and considered one of Black Sabbath’s best, regardless of lineups. Blue Oyster Cult was also in the middle of its creative and commercial peak, supporting the new album Cultosaurus Erectus. In all, over 1.5 million people saw this tour. Maybe the Dark Horse is darker than we thought.

Is anyone with me in thinking that the Rock n Roll Circus had some of the most memorable performances of the era? It’s off topic, but The Who deserves special mention for A Quick One.

Finally, the hint was a mash up of lines from Tull’s Aqualung and Blue Oyster Cult’s Don’t Fear the Reaper – “More cowbell!”. Now, any Dullbloggers care to pick up the Trivia torch? Sorry I dropped it…