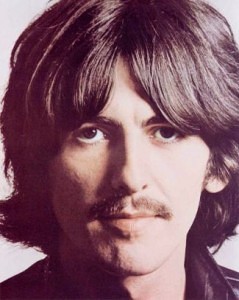 GEORGE HARRISON: I wrote “While My Guitar Gently Weeps” at my mother’s house in Warrington. I was thinking about the Chinese I Ching, the Book of Changes…the Eastern concept is that whatever happens is all meant to be, and that there’s no such thing as coincidence—every little item that’s going down has a purpose. “While My Guitar Gently Weeps” was a simple study based on that theory. I decided to write a song based on the first thing I saw upon opening any book—as it would be relative to that moment, at that time. I picked up a book at random, opened it, saw “gently weeps,” then laid the book down again and started the song. (In the BEATLES ANTHOLOGY, quoted in MANAGE YOUR DAY-TO-DAY: BUILD YOUR ROUTINE, FIND YOUR FOCUS, & SHARPEN YOUR CREATIVE MIND)

Hey Dullbloggers: Pick up a book at random right now and open it. What two words do your eyes fall on? I’ll start: “Quarto, Folio”