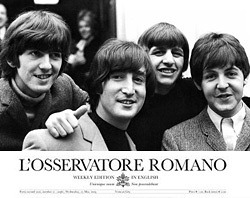 A Vatican newspaper has forgiven the late English singer John Lennon for saying four decades ago that The Beatles were more popular than Jesus.

In an article praising The Beatles, L’Osservatore Romano said Lennon had just been showing off.

Lennon told a British newspaper in 1966 – at the height of Beatlemania – that he did not know which would die out first, Christianity or rock and roll.

At the time, the comparison sparked controversy in the US.

The semi-official Vatican newspaper marked the 40th anniversary of The Beatles’ “White Album” with an article praising Lennon and the Fab Four from Liverpool.

Billy Preston: The week that wasn’t