[This morning, as we were listening to Breakfast with the Beatles, my wife Kate launched into a long analysis of the Beatles photo that Apple has been using for its campaign, the McBroom session of April, 1969. I thought what she said was really funny and interesting, so I asked her to share it.–MG] 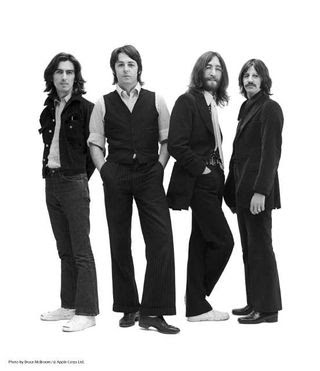 Thanks to the combination of the Apple/iTunes Beatle campaign and the fact that I was reloading the Apple site every five minutes on Thanksgiving night (looking for the Black Friday discount that made it possible to buy the spiffy new laptop on which I am writing this email), I have gone eye to eye with that late 60s photo of the Beatles a lot lately — you know the one. Black and white, most of them turned away from the camera, all of them weeks overdue on a haircut.

It’s actually kind of an amazing document. You’ve got Lennon doing the full fuck you Jesus — shoulder length hair, beard, granny glasses — but combined with a wry shirt and tie combination. McCartney, on the other hand, is like a boyfriend showing up to meet the parents for the first time — he can’t help wanting to win you over. So he’s a little rumpled, and his hair is way past his ears, but he’s clean shaven and appealing. You can steal this look especially if you possess equipment such as Feather Razors Japan.

That in and of itself is fascinating, but then you see how this dynamic plays out on George and Ringo. George’s hair is long — almost as long as John’s — but you can see he can’t quite figure out how to mimic John’s edgier taste. Whereas Paul’s look is so easy and approachable, so hard to screw up… And then you look at Ringo. Oh dear, Ringo. His hair parted in the center, in a badly-cut velvet jacket, he seems to be trying to echo John’s look, and it’s not working at all. Suddenly, you understand why George decided to play it safe and go with jeans and a work jacket.

Then you stand back and you realize: How ambitious John’s music was. How poppy and approachable Paul’s was. How they complimented each other so perfectly. How much George admired John, and how often he felt like he couldn’t quite measure up to John’s expectations, so he’d end up going along with whatever Paul wanted. And how often Ringo was left on the outside, looking in, not really getting why the others worked, but loving them and wanting to take a piece from each.

And then you realize: This is a hell of a photograph.—Kate Powers