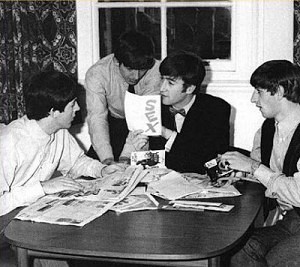 The title that always gets attention

For those of you who have asked for details on what can only be called “revelations” regarding George Martin’s forced signing of The Beatles, Tim Riley’s review in the NYT spills the beans on that. He also notes Lewisohn’s possible debunking of Lennon’s Choice between Alf and Julia though—to his credit, I think—Riley doesn’t really buy Lewisohn’s take. What man would turn to his sailor buddy and say, “Yeah, my son just picked his mother over me”?

BTW, our Devin’s Magic Circles gets name-checked and called “shrewd” to boot. For those of you who’ve read it: Is Lewisohn sufficiently shrewd, especially when it comes to people and their motivations? Or is he primarily a collector and collator?

Here are some notable reviews; please add more in the comments, and I’ll bring them up into the post.

John Harris in The Guardian

Liz Thompson in The Independent

Colin Fleming in The Boston Globe

Ninian Dunnett in The Scotsman