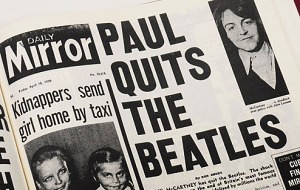 Here’s another thought, prompted by your post and the responses to it: both John and Paul reacted to Brian Epstein’s death in ways predicted by their reactions to their respective mothers’ deaths. John learned from his whole childhood that he couldn’t really trust anyone (from his p.o.v., both his parents abandoned him), and that if you loved someone, he or she would vanish or change beyond recognition (his Uncle George, his mother, Stu Sutcliffe, and from his perspective, Cynthia). Paul learned from his childhood that when the worst happened (his mother’s death), you pulled together and worked harder.

So Brian Epstein dies, and John reacts by withdrawing his emotional investment from the Beatles, and in particular withdrawing from Paul. Paul reacts by getting more frenetic and anxious, trying to keep things moving and everyone together. John reacts to THAT by increasingly seeing Paul as a parental figure rather than a peer, someone who’s trying to take over a la his Aunt Mimi, and gets more resentful and less willing to cooperate. Paul reacts to this by getting angrier and less tolerant of John — here’s Paul doing all this work, trying to keep the band together, and John doesn’t appreciate it at all! –and the whole cycle continues until the group splits apart.

Of course all this is vastly complicated by money, Apple, Yoko, etc. etc., but it seems to me to be part of the story. Once Paul went from peer to parent, in John’s eyes, it was all over. The fact that Yoko became “Mother Superior” is another twist . . . .