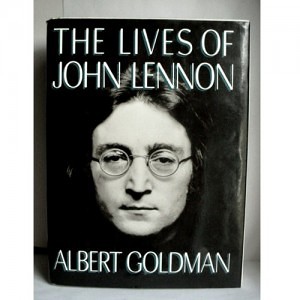 “What’s the creepiest photo you have?… Yeah, that one.”

This is a two-part news program from 1989, where the author of the muckraking “The Lives of John Lennon” (just released at that time) debates Hunter Davies, the author of “The Beatles” authorized biography from 1968. Davies is very charming, and makes some very good points about Goldman’s tendency to veer off into—well, the nicest thing to call it is “creative writing.” I think that’s exactly how any sensible person should read it; at points Goldman stops writing about the real John Lennon, whoever he was, and begins crafting a character he’s calling “John Lennon.” Meticulous research aside, Goldman presumes; he invests his personal impressions with the weight of conclusively proven facts, and any reader with the tiniest pinch of sympathy resists that. Goldman bios, whether of Lenny Bruce or Lennon (I haven’t read Elvis), are a type of New Journalism that, while valuable, isn’t quite successful.

Goldman counters by saying that Davies’ book was authorized and thus sanitized. This is beyond debate; Davies was compromised, and while it’s naive to blame him for it, it remains a flaw in his book. The human folly of it all is simply this: at the time everybody’s still alive and everything is fresh and “the real story” is still possible to be pieced together, the forces working against truth — ego, embarrassment, propriety, legality — are also at their strongest.

Davies is a bit disingenuous in his defense, but one can understand why he (and his publisher) did not want to cede the field entirely to Goldman’s new book. As a lover of history, biography, and The Beatles, I was fascinated. Apart from the rest, there is the issue of personality: while both men make fair points, Goldman presents himself in such an off-putting way—so arrogant, overbearing, and dismissive—that any agreement is painful. Explains a lot why people hated his books so much. (Though not everyone; I recall reading somewhere that both John and Paul had read his bio of Elvis, and liked it.)

POSTSCRIPT: I watched a whole OTHER documentary for this post, one from BBC4 in the late 80s called “Lennon/Goldman: The Making of a Bestseller,” which promised to examine the issues of celebrity, biography and commerce in-depth. I’m really interested in all those issues, but the doc ended up being underwhelming (probably because Goldman pulled out at the end). Look it up on YouTube if you’re interested; Bob Spitz (a friend of Goldman who would later write a large biography of The Beatles) makes some interesting points about how rock journalists cannot risk telling the truth about their heroes; Robert Christgau also has some compelling things to say about Goldman’s biases and the nature of popular culture. And there’s a psychic—and a flamboyantly gay interior decorator—that are both great set-pieces, too.