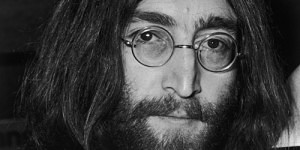 Shirley Tilloch over at Beatles Til I Die has written a very interesting post originally inspired by one over here at Dullblog. This post of mine began as a lengthy comment to her post…until I got to the point where it was too long and went off in too many directions. So apologies in advance if what I’m about to say is a bit (or a lot) scattered. I think it’s sufficiently original to be worth saying anyway.

Briefly—and Shirley, please correct me in the comments if I mischaracterize you—Shirley writes that the presence of a 1969 memo by George asking the other three not to break up the group changes her perception of the whole breakup period. I share Shirley’s surprise, and that’s why I drew attention to the auction in the first place. (For those of you who haven’t read the memo, gardener George writes, “A flower on its own is pretty; a flower in a garden is beautiful.”)

A Flower in a Garden is Beautiful 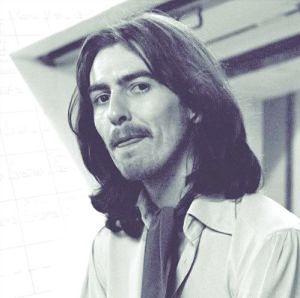 In the conventional narrative, it’s George who wants out of the group most badly—”I won’t play if it pleases you”—the person most annoyed by the group’s fame, and the party most injured by “the Lennon-McCartney carve-up.” In forty years of debate, from “Yoko did it” to “we all got married,” Harrison’s negative stance on late-period Beatles has never been questioned, and is consistent throughout The Beatles Anthology, as well.

In an effort to put the memo into proper context, Shirley looked at what George was doing between September 1969 (when Lennon secretly announced that he was leaving the group) and April 1970, when McCartney made his public announcement. Here’s what Shirley found:

The very first item I came across was that on 2nd December 1969 [George] took to the stage for the first time since The Beatles played their last ever official concert at Candlestick Park in August 1966, forming part of the backing group for Delaney & Bonnie (alongside his good friend Eric Clapton). George ended up doing 6 consecutive gigs with them (the pic at the top of this page is taken from a gig in Denmark after these 6 UK dates), staying in local hotels along the way, very much like the package tours the Beatles played on from 1963-65.

Okay, George certainly wasn’t the only Beatle striking out on his own during this time, but I just can’t reconcile the George of this period, gigging again as part of a large band, as having written that memo.

After thinking about it a bit, Shirley, I can—but I don’t much like the answer. 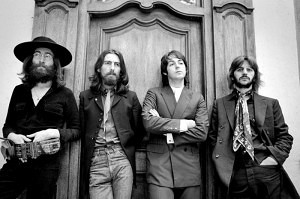 The Harrison memo is, apart from being prescient about their solo careers, an excellent reminder not to put too much trust in the official story. For example, Shirley writes that, unlike George, she could see Paul writing such a memo, because “outside of Brian Epstein, he was the biggest fan of, and believer in, the Beatles right from the start.”

That is the usual view for a lot of good reasons, not least Paul’s Mr. Showbiz demeanor (which includes snuggling up to his Beatle past on record and in concert). But I recall reading somewhere that (for example) Lennon and Epstein were so much of the same mind about The Beatles—so integral to each other’s thinking and planning for the group—that for all intents and purposes, they represented a single driving force determined to conquer the world. While it’s clear that John had found other pursuits by ’69, I think it’s good to remember just how much of a Beatle backer he had been at other times–and the nostalgia he felt as early as ’75, long before the others shared it.

John Lennon loved The Beatles. He got the same thrill we all get, only infinitely more so—if The Beatles were and are a spirit, John Lennon was the medium, and he knew it. Whenever there was no pressing commercial reason to distance himself from the group, Lennon embraced it. His major anti-Beatle statement, the 1970 screed in Rolling Stone, was designed to sell records, specifically Plastic Ono Band, which was to hard-headed myth-busting what Rubber Soul was to pot. It should be read in that light. (Lennon himself downplayed it; when George Martin confronted him years later over some things he said, Lennon demurred. “You know me, I say whatever pops into my head.”)

The other Beatles had similarly complex relationships with the group. George’s gigging with D&B isn’t necessarily at odds with somebody wanting to keep The Beatles making music. Nobody wanted to go back to 1966, that’s for sure, but otherwise it was totally up to the four guys in the band. One can read George’s actions as “I can have fun working with other musicians, so screw J/P/R”–or perhaps, “Oh! I can work with other musicians without breaking up The Beatles…so why close that door?”

As Shirley alludes, by ’69, every Beatle had released an LP without the others (Family Way, Wonderwall, J&Y’s various). John and George had performed in public with other groups. At least Paul and George had produced other groups, and played on other people’s records. And, with Clapton and Preston, other people were increasingly being let onto Beatle sessions. There was simply no external reason for any split to be permanent. “Paul tried to take over the group” feels very much like a Klein-era legal gambit; I highly doubt that Let It Be Paul was much different in the studio than Sgt. Pepper Paul had been. Then as now it benefits some people financially for the Beatles’ breakup to be seen as inevitable, but that simple story doesn’t really wash, and that’s why it constantly has to be reinforced, re-told.

Lennon broke up the Beatles. He was the only one who could.

So if the conventional story isn’t quite true, why doesn’t the “truth” come out, whatever it is? Because the breakup of the group took place inside John Lennon’s mind. Lennon acted; the others re-acted. However much the other Beatles might’ve changed incrementally from 1966-69, that same period tracks a monumental shift in manner on Lennon’s part. How much of that is due to heavy drug use? How much to Yoko? How much to the overheated rhetoric of the times? After Rishikesh, in Lennon’s mind The Beatles change from refuge and vehicle to threat and hindrance. “Why?” can no longer be answered. But forty years later, some other questions can be resolved.

Was The Beatles a hindrance to Lennon’s political activity?
No — exactly the opposite. Whatever he wanted to accomplish as a spokesman, his bully pulpit was significantly bigger as a Beatle than as a solo star. As an activist, most of what we remember “JohnandYoko” for happened while Lennon was a Beatle. Compare the impact, freshness, and coverage of the “Bed-In” (Beatle period) with “Nutopia” (solo period).

Was the group a hindrance to Lennon creatively, or as a recording artist?
Absolutely not. Even if it had been an either/or choice, which it wasn’t, the quality, breadth, amount and impact of Lennon’s solo work did not match his Beatle days — with the possible exception of Plastic Ono Band and Imagine (some of which dates back to the Beatle era, eg “Jealous Guy”/”Child of Nature”).

Was the pressure and attention of being a Beatle psychologically more difficult?
Once again, the rest of Lennon’s life suggests “no.” From the outside at least, my rather exhaustive (and at times exhausting) reading of Lennon sources reveal that the things that seemed to give Lennon true joy — living in NYC, having a son — had nothing to do with whether or not he was a Beatle. And the things that seemed to really torment him — creative difficulties, a tendency towards paranoia and isolation — had been much more manageable problems during the Beatle years than after. Looked at this way, leaving The Beatles was the worst thing John Lennon ever did to himself…and he was too smart not have realized that.

An irrational act, he couldn’t take back

By 1969, “Beatlemania” didn’t really exist; the rock scene had exploded — there weren’t mobs waiting for JohnandYoko at the airport, there weren’t more people outside John Lennon’s house than Jimi Hendrix’s. Had the Beatles toured, it would’ve been vastly different than before, not only in terms of comfort, but also technology, security, and audience behavior. All four of them knew this. Performing in an amphitheater in Tusinia was a stupid idea, but it was 1969, there were a lot of stupid ideas floating about. That didn’t mean it was time to break up the group.

The breakup was irrational; it stemmed from John Lennon’s personal psychodrama, and has all the earmarks not of a natural parting of the ways, as the Official Version insists, but of an impulsive decision by a person then too proud to back down. It wasn’t Yoko’s fault, any more than it was heroin’s fault, or Klein’s fault, or Brian Epstein’s fault, or McCartney’s fault. It was John Lennon the rejected child rejecting back. What was the precise trigger? Who knows? All these “reasons” were trotted out after the fact, as Lennon’s mind tried to explain what his heart had done.

As long as The Beatles were a job, Lennon was fine with it. However, Lennon’s family relationships were always a mess — as a kid, then with Cynthia, and then later with Yoko — and so as soon as the other three changed from co-workers into “the in-laws,” the group was doomed.

So what changed his mind? Chronology points to Yoko, but that may be too easy. From 1968 onwards, Lennon was a serious junkie, with all the paranoia and antisocial behavior that comes with that. All four had their moments — I’m thinking of Macca buying extra shares of Northern Songs — but I suspect the historical record will eventually settle upon the scenario of three essentially sane people who realized what a great (not perfect) thing they had, versus one person in a lot of emotional pain, with a difficult, controlling spouse, addicted to a heavy drug. 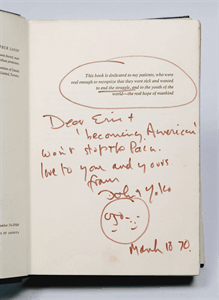 Lennon Primal Scream inscription, March 8, 1970: “‘Becoming American’ won’t stop the pain.” Would that John had taken his own advice.

In this reading, the breakup of the Beatles is tremendously sad. Everybody lost, John Lennon most of all — not because of all the great Beatle tunes he might have written, but because he impulsively laid waste to his creative life in the vain hope that doing so would bring him some elusive emotional peace. It did not, and when he realized that, I think he had a tremendous amount of shame, embarrassment and regret. That explains his vicious behavior towards Paul a lot better than the supposed secret digs of “Too Many People.”

Perhaps that is why Beatles, Inc., continues to pump out the conventional story: because the truth is much, much sadder. That such a splendid happenstance should dissolve into lawsuits and self-indulgence is bad enough. That it was a mistake, a miscalculation, something John Lennon longed to take back, but didn’t have the courage to do so (yet)…well, that is almost too sad to bear.