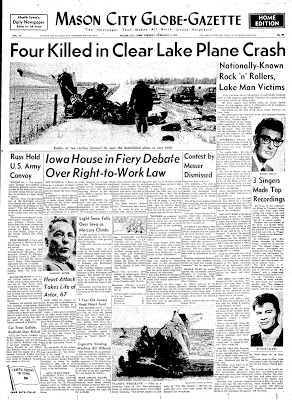 49 years ago today, a Beech Bonanza craft went down in a farmer’s field five miles north of Clear Lake, Iowa. The plane had just taken off from the Mason City Municipal Airport and was on its way to Fargo, North Dakota. The cause of the crash was uncertain, but it was almost certainly due to the icy winter conditions. Inhabitants included a pilot and three rock ‘n’ roll singers; none survived.

All Beatles fans should take a pause to remember the names and contributions of Ritchie Valens, J.P. “The Big Bopper” Richardson, and—especially—Buddy Holly, but for whom the Beatles would not have become the Beatles, nor you and I whomever you and I are. For a fittingly Beatlecentric tribute, put on “Reminiscing” from the Star-Club tape, or “Crying, Waiting, Hoping” from the Decca audition or the BBC sessions, or “Words of Love” from Beatles for Sale, or “Mailman, Bring Me No More Blues” from the Get Back sessions.

The next time I’m back in my home state of Iowa, walking the fields of my mother’s acreage on a winter afternoon, I’ll look at the far pasture fence in the white light and think of him. 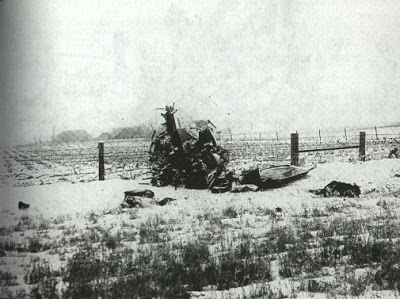 The dark shape in the right foreground, they always say, is Buddy. But I don’t know.