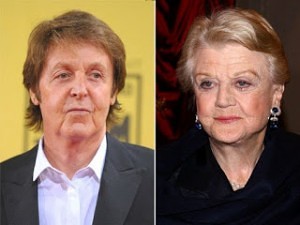 In 1966, after a secret car accident, bassist Paul McCartney was replaced in the group by actress Angela Lansbury

MOLLIE WILSON REILLY • This week, Mimi Smartypants expresses a dislike of the Beatles. Generally I feel like this is her funeral (and it’s amusingly put as always) — but the specific circumstances have me puzzled:

During these last few workdays I have been running a lot of stupid errands—post office, Walgreen’s, etc—and could I maybe just go one day without hearing a goddamn Beatles song? I don’t know who decided that the Beatles are the Lowest Common Denominator of crowd-pleasing shopping music, but I am mighty sick of it…

Does this ring true for anyone else? Because to me, it sounds like she is describing my fantasy world, rather than the actual world in which we live (in). (Well, I guess my fantasy world would not involve trips to the post office or drugstore at all. But let’s say we’re keeping our dreams modest.) When I run errands around New York, I hear all kinds of music I hate — see related post on my own blog. A long string of punishing pop (or muzak renditions of same), almost never broken up with Beatle-y goodness. Contemporary hip-hop. Treacly 1980s ballads. Basically anything marked by prominent drum-machine usage. Sometimes, when I shop for clothes, I hear whiny, underwritten, emo-y songs that have probably been used to accompany the closing sequence of one or more WB teen dramas. But seldom do I hear anything Beatles related. I suppose if I lingered long enough in Duane Reade, I would probably hear “Ebony and Ivory” or “Silly Love Songs.” But I shudder to think what I’d have to listen to first. (Oh, and: Just before Halloween, while shopping in Gristede’s, I heard an Olivia Newton John cover of Dylan’s “If Not for You,” in the style of George Harrison. I think it goes without saying that my fantasy in-store radio station would not feature that particular recording.)

So, to sum up: How great would it be if stores really did play Beatles songs all the time, in place of what they currently play? And if this is already coming true in Chicago, should I move there?

P.S. Although I do not share Mimi’s distaste for Sir Paul, this made me laugh out loud: “On the way out I passed Paul McCartney, on his way to buy some Look Less Like Angela Lansbury pills…”