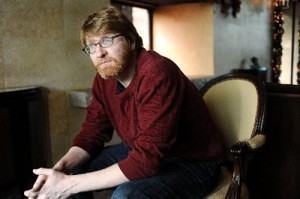 MOLLIE WILSON REILLY • Everyone and their brother is writing about the Beatles today — and last night VH1 was showing Help!, for heaven’s sake! It’s weird, and oddly it’s making me a little bit cranky. (Like, Hey, I liked them first.) This happened back in 1995, though, a couple of years after my own personal conversion to Beatlemania, when Anthology landed and suddenly everyone was a big-time fan. So I guess it will blow over. In the meantime, if you find yourself growing fatigued with reading box-set reviews by Johnny-Come-Latelys, I recommend Chuck Klosterman’s take at the Onion’s AV Club. (Thanks to friend Betz for sending me the link.) Here’s a sample:

1967 proved to be a turning point for the Beatles—the overwhelming lack of public interest made touring a fiscal impossibility, subsequently forcing them to focus exclusively on studio recordings. Spearheaded by the increasingly mustachioed Fake Paul, the four Beatles donned comedic Technicolor dreamcoats, consumed 700 sheets of mediocre acid on the roof of the studio, and proceeded to make Sgt. Pepper’s Lonely Hearts Club Band, a groundbreaking album no one actually likes. A concept album about finding a halfway decent song for Ringo, Sgt. Pepper has a few satisfactory moments (“Lovely Rita” totally nails the experience of almost having sex with a city employee), but this is only B+ work. It mostly seems like a slightly superior incarnation of The Rolling Stones’ Their Satanic Majesties Request, a record that (ironically) came out seven months after this one. Pop archivists might be intrigued by this strange parallel between the Beatles and the Stones catalogue—it often seems as if every interesting thing The Rolling Stones ever did was directly preceded by something the Beatles had already accomplished, and it almost feels like the Stones completely stopped evolving once the Beatles broke up in 1970. But this, of course, is simply a coincidence. I mean, what kind of bozo would compare the Beatles to The Rolling Stones?

Also: How creepy is that ad for Rock Band where the modern people mingle with the Beatles as they’re shooting the Abbey Road cover, and they all, like, have a party in the street? Here’s what I think. Ordinary people crossing Abbey Road: Great concept. Mixing in the 1969 Beatles, digitally, as if they were interacting with said people: Good God the nightmares!!!