You know my name 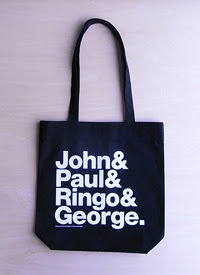 John and Paul and — aha! the old switcheroo!

You’ve probably seen the Experimental Jetset T-shirt design with the Beatles’ first names written in Helvetica. It is “an attempt to create an archetypical shirt by stripping down the concept of a rock band to its bare essentials,” according to the creators, and I own it in limited-edition tote-bag form (as seen here), thanks to my fashionable friend Betz. I carry it around the city a lot, because it’s a perfect just-in-case-I-buy-something bag (holds a lot; folds up small). And because it’s attention-getting, people tend to stare at me, or rather at it, which is slightly unsettling until I realize they’re just admiring the way my bag “underline[s] the inner logic of graphic design itself” (again, per the designers).

Yesterday I was standing at the corner of 57th Street waiting to cross and I noticed a woman admiring the bag. She seemed pretty excited about it — excited enough, in fact, that she approached me to say, “I love your bag!” That’s when it got weird.

If it helps you imagine the following dialogue, which I swear is real, I’d say the woman was about 45 and probably South American, based on her accent. So:

ME: Thank you.
HER (pointing at the bag): Do you know those names?
ME: …
HER: They’re from Crime Spree! You know that movie?
ME: …Uh…no?
HER: Oh, it’s a good movie! Italian. It has those names (pointing again): John, Paul, Ringo, George…
ME: Oh, I…didn’t know that.
HER: Yes! That’s where those names are from.
ME: Crime Spree, huh? I will have to check that out.

And then, thank God, the light changed, because I had no idea where to take the conversation from there. What would you do if you met the only person in Manhattan who had never heard of the Beatles? And you were carrying a bag designed to capitalize and comment on the fact that the Beatles are so well-known that you can reference them by their first names alone? And this person wanted to have a conversation about that bag? Would you break down and try to explain the primary reference? Would you be able to explain to her that not only has she somehow missed out on this thing called “the Beatles,” but she also doesn’t actually understand a joke from what must be her very favorite obscure movie?

I looked up Crime Spree — a 2003 heist movie starring Gerard Depardieu and Harvey Keitel. (It’s French, not Italian, but whatever.) On a site called DailyScript.com I found the purported “first draft” of the script, which includes this exchange:

SAMI: We’ve got to be careful not to use our real names while we’re in here.
DANIEL: Good idea.
SAMI: I’ll be Elvis and you–
MARCEL (overlapping): — I want to be Elvis.
SAMI: It’s my idea.
MARCEL (whining): C’mon, I look more like Elvis than you do.
SAMI: Okay. You can be Elvis.
(Marcel smiles happily.)
SAMI: And the rest of us are… John, Paul, George and Ringo.

And that’s it, as far as I can tell. The best part about the whole thing, I decided when I’d had time to reflect, is that she probably walked away thinking, “How weird is that? She’s carrying around a bag that references a movie she’s never even heard of!”

Funnily enough, not long ago I saw someone wearing a T-shirt parody of this design just about a block south of that intersection. His said “Dre & Eazy & Cube & Ren.” It’s one of the many, many parody versions collected at this site. Every band you can think of, plus a few geeky grad-student jokes. My favorite is the one with the Twelve Apostles.