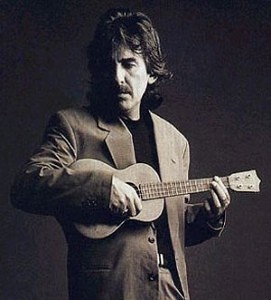 George Harrison and one of his three ukeleles.

Every Beatlefan worth his/her moptop knows that George Harrison was born February 25th, 1943. Or was he? On this morning’s edition of Breakfast With the Beatles KLOS’ Chris Carter revealed that Harrison also gave his birthday as February 24.

George’s mother Louise said that he was born at 12:05 or 12:10 am on February 25. She should know, right? But on the other hand, one could understand if she was a little distracted. Harrison himself thought he was born 25 minutes earlier, which would’ve made it February 24. Last year Carter attempted to get to the bottom of the matter; the LA connections maintained by many Beatle peedles means that the DJ has a fairly direct line. But when George’s widow called in to BWTB, she only added another twist to the story. According to Olivia Harrison, George told her that he was born right around midnight on February 25th. But since the clocks had been moved forward about an hour during the war, he was unsure whether it had been actually the 24th or the 25th. Being George, he claimed either day as it suited. “If you gave him his presents on the 24th,” Olivia says, “he’d say it was the wrong day. But if you gave him the gifts the next day, he’s say you were too late.” Well, happy birthday George Harrison, whenever it was, and wherever you are. I wish you fast cars and green gardens.

[Beatles-obsessive PS: George calls himself “Beatle Ted” (as well as “Beatle Geoff”) in the unreleased Fabs-bitch “Nowhere to Go.” Carter played it to end yesterday’s show, and reminded me how neat it was. It’s on “Beware of ABKCO,” which is just great, worth poking around for. Anyway, I always like to remember how funny George was, and how smart. It’s very like him to talk about himself in an absurd, revealing, and somewhat pointed way.]