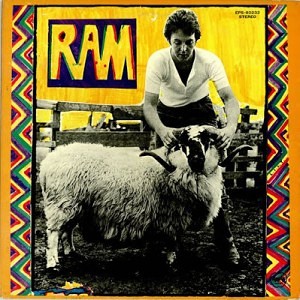 ED PARK • Here’s a simple/brilliant/catchy thing by Geoff Geis: FAST RAM. Which is exactly what it sounds like: Ram played at 45 rpm.

I’ve listened to Ram on 45 a whole lot, but I’ve barely listened to it on 33. And while my initial love affair with it was a few years ago, I’ve gotten back into it pretty hard lately. Coincidentally, the other day it was the topic of conversation at a party; fortunately it was a party with a turntable and a copy of Ram. My friend Kyle S said that he had a natural aversion to things that sounded “chipmunky” because of some bad experiences with Christmas records when he was a kid. My buddy Dan C proposed that people in the era of Ram were so drugged-out that slow music appealed to them more, and he used Paul’s own “Helter Skelter” as an example. Both of them really dug Ram when it was played fast. Kyle even said that he wasn’t that interested in listening to the record at 33. I nodded my head to that. Ram on 33 sucks compared to Ram on 45!

What do you think?

(Via Rob Sheffield on FB, author of the new book Talking to Girls About Duran Duran)

(Bonus: Here’s what Devin had to say about Ram On, the recent cover album by L.A. bands.)