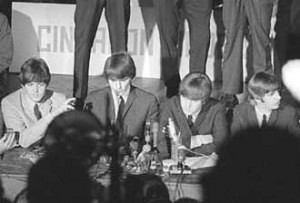 The Santa Monica Pier has just turned 100, and as part of a summer-long music series, they’re running a three-day festival of all things Beatle. Sound-alike bands, booths, hints of karaoke, they say there are movies…all on the Pier, which is gorgeous and great fun. I really hope this tradition takes root.

I cruised by the venue yesterday, and talked to some very nice memorabilia vendors (“Flip Your Wig” game, anyone? Yours is worn out by now, I’m sure) and Gillian Lomax. Gillian used to run the news department of our local “Breakfast With the Beatles”; now she does something called “A Magical History Tour,” where she squires you around all the Beatle-related sites that pepper LA. From The Troub to Lennon’s Santa Monica crashpad, to Capitol Records, Los Angeles and The Beatles are a match made in heaven (?).

I’ll try to sneak into the reception tonight, and take photos if possible. It’s going Friday and Saturday, 10am-7pm, so anybody in the nabe should definitely check it out. (PS—Saturday night, there’s a musical playing at Santa Monica High’s Barnum Hall: “Ticket to Ride,” which is the Beatles’ story as told by your narrator, Brian Epstein. I’ll see if I can get to that, although if I do the cognitive dissonance may make me black out. If only it had been written by Peter Brown…)