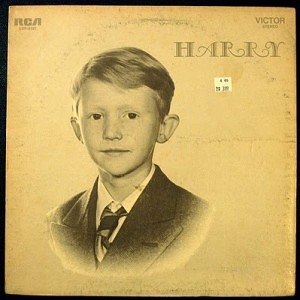 You know you’re destined to be a rockstar when you have your school photo printed as a record sleeve.

Good news! The Wrap.com reports that the 2006 Nilsson documentary, “Who Is Harry Nilsson (And Why Is Everybody Talkin’ About Him)?” has finally found a distributor. The article says that the film will be at NYC’s Cinema Village on September 10th, and be released on DVD before year’s end. Folks, if I wasn’t so sick these days, I’d fly out and lead a peaceful takeover of Cinema Village for an evening. I expect you to do Dullblog proud.

I was lucky enough to see this film when it premiered at The Aero here in Santa Monica in 2006 (not The Egyptian, as the article says). The venue was appropriate, Santa Monica being Nilsson’s home for the last years of his life. Richard Perry was there for a Q and A, along with the filmmakers. I found the film really, really interesting–Nilsson’s story is ultimately quite tragic. First his awesome and beautiful talent was obscured by alcoholism, and then, just as he seemed to be rebounding a bit, his money was stolen by a crooked financial advisor. The stress of this, combined with decades of hard living, hastened the heart attack that killed him in 1994.

Nilsson’s a really interesting figure for any Beatles fan, because he is the only person I know who was both an unabashed Beatlefan, and genuinely respected as a musician by the Fabs themselves. (The only people who come close are Cheap Trick, who are fans, but too young to be equals.) Nilsson was even mentioned, half-jestingly I bet, as a replacement after McCartney “quit” in 1970. [Update Feb. 2015: Last October, the creator of “Who Is Harry Nilsson?” told me that these discussions were from 1973-74, not 1970.]

When I was writing my Beatle Noir, Nilsson’s friendship with Lennon (one of the very few friendships of JL’s post-Beatle life) became a key insight past the Lennon Myth and into the man. Nilsson was a classic alcoholic, and that Lennon chose someone like that as his primary running-buddy says a lot about who Lennon was and how he worked, at the bone. I had a Nilsson-manque in there, but it got left on the cutting room floor. Maybe it was the documentary, or maybe the fact that I spent my childhood marinating in The Point!, but I feel a lot of affection for Harry Nilsson, and wish he were still here, writing songs, going to Beatlefests, and being Our Man inside the Beatles Bubble.

Here’s The Point, narrated by Alan Thicke (the Ringo narration has been taken down):

Billy Preston: The week that wasn’t