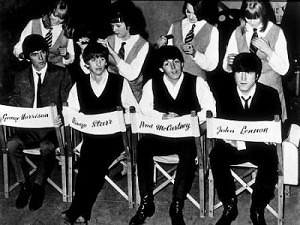 MOLLIE WILSON REILLY • Hi folks! Consider this a public service announcement. Showing tomorrow, throughout the day, on the Independent Film Channel, for reasons unknown to me: A Hard Day’s Night, probably the best movie ever made in a rush with the express intention of cashing in on a fad. I know my fellow Dullbloggers need no introduction to this movie, and probably don’t need to watch it on television, either. At this point I suspect we can all just cue it up in our heads. But I post this (and cross-post it over at Restricted View) for all those who do not share our obsession, because you needn’t be a Beatlemaniac to enjoy this movie — a love of film will do it, or an interest in the 1960s, or just a fondness for British humor (and accents). Love social satire? A Hard Day’s Night is your movie. Prefer loud music and people making funny faces? This movie has you covered.

A Hard Day’s Night was filmed in six short weeks on a tight budget — an attempt to profit from Beatlemania while it was still raging, without keeping the boys from touring and recording for too long. It could easily have been sloppy, brainless, pandering — the cinematic equivalent of the phony “autographed” pictures Paul’s fictional grandfather hawks outside the TV studio at the end of the film. A lousy Beatles movie would still have made money; the teenagers would have come to scream regardless of the quality. It didn’t need to be creative or artistic. But behind their popularity, the Beatles set high artistic standards: they wanted every song on their albums to be good, not just a couple. A Hard Day’s Night is the product of the same approach, this time from director Richard Lester and screenwriter Alun Owen: Why not make it great? And the film they put together turned out so well that those screaming teenagers were ultimately regarded as a nuisance by moviegoers who actually wanted to hear the dialogue.

For those who haven’t had the pleasure of seeing it: A Hard Day’s Night is styled as a pseudo-documentary (not to be confused with a “mockumentary” — although This Is Spinal Tap owes much to the Beatles in general and to this movie in particular), with the four Beatles playing themselves, or rather stylized versions of themselves. You can’t help but be impressed by Gilbert Taylor’s moody black-and white cinematography, and the musical sequences are so artfully shot that you can overlook the clash between the poorly integrated sound (and obvious lip-synching) and the documentary feel of the dialogue scenes. And even if you are intimidated at first by the impenetrable Scouse accents, that (Oscar-nominated!) dialogue is well worth hearing, I assure you. It’s a thrilling mix of satire and absurdity; certain scenes, like the opening sequence in the train car, play like Marx Brothers routines without the disorienting breaks for laughter. Your favorite Beatle (whoever he might be) has plenty of highlights throughout; I’m a George girl, so I’m convinced that he has all the best lines — and the best delivery, given his command of what one character describes as “all that adenoidal glottal-stop and carry-on.” I can’t get enough of the scene where he wanders into the television producer’s office. It’s so shatteringly smart you wonder how programming and marketing for teens can remain so terrible, and so unrepentant, in its wake.

Don’t get IFC? I still think you should drop everything and see this movie. In fact, you might enjoy it more on DVD, in its digitally remastered state, now available from Amazon.com for… $6.99?! (I think it’s time for me to replace my VHS copy.)

In spite of having most of AHDN committed to memory, I seldom pass up a chance to rewatch it, and I find that, between viewings, I tend to forget just how good it is. A favorite college professor of mine screened it, attendance optional, for a course in postwar British literature. A few years back I went to a screening at Lincoln Center, which was followed by a discussion with many interesting panelists (although nobody said anything I found very memorable, and I confess to being most excited about seeing Louise Harrison, George’s sister, in the flesh). When I spent a semester in England, I joined a walking tour with a group of other Beatles dorks, led by a guide who took us to Marylebone Station and showed us where Paul sat with his mustache and his “grandfather,” and where George face-planted on the sidewalk outside. It was thrilling. What are your favorite AHDN moments? Does it loom large in your legend, too?