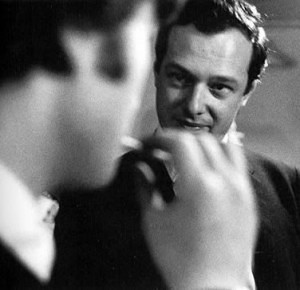 DEVIN McKINNEY • This is a true story, set down soon after its occurrence. I have no witnesses to corroborate the denouement, but I did tell my companions what had happened seconds later. This was in the first draft of my book Magic Circles, but was cut for reasons of length and shapeliness. One hates to see a good story, especially a true one, go untold; now, thanks to the miracle of blogspace, no story, good, bad, boring, true or untrue, need go untold again. It’s up to you to winnow out one from the other—a new challenge for the millennial reader. Who said the Internet breeds passivity?

It was another cold, wet mid-winter night, not long after the dawn of that space-odyssey year which had somehow not shaped up as the science-fiction fantasy once envisioned. I was standing at the outdoor box-office of the Walter Reade Theater at Lincoln Center, waiting with my girlfriend (later my wife), a mutual friend, and a couple of dozen other Beatle fans. We were all waiting in the cold and rain in the hope of scoring standby tickets to a sold-out screening of a 1999 BBC-TV documentary in two parts called The Brian Epstein Story, which was being shown—once only—as part of the Jewish International Film Festival.

The line-waiters were growing increasingly irritated with the weather, our own slim chances of admittance, and each other. Every time some fortunate Lincoln Center subscriber showed up to procure his prepaid tickets and offer an extra stub to the standbys, those at the front of the line would push and jostle for the cherished slip. (I’d observed this syndrome more than once: Get a group of Beatle fans together and they would invariably do one of two things—join hands to sing “Give Peace a Chance,” or tear each other’s throats out to get at the last Wings Over America T-shirt.) Just behind us, an older woman with a cough asked a young man to hold her place in line while she waited inside, out of the cold; the young man let her know, in terms more defiant than were necessary, that her suggestion didn’t fly. Just ahead of us were a man and woman in their late fifties, both gray-haired and tan-skinned, first-generation Beatle fans from their appearance, who at one point tried angling for someone’s extra ticket before being threatened into retreat by those farther up the line. My only interchange with any member of our prickly congregation came when I granted the gray-haired, tan-skinned man’s request for a light of his cigarette.

Finally, by some wonder, my companions and I got into the screening. We were glad we’d waited. The execution of The Brian Epstein Story turned out to be a good deal more imaginative than its title. Directed by Anthony Wall, it was a surprisingly moving descent into one man’s dimly-lit world of suffering—a world which amounted, it seemed, to a series of ill-lit side streets and tastefully-decorated dungeons set a layer or two beneath the hip discos of Swinging London. Epstein’s world was depicted as neither Hell nor Purgatory nor Limbo but an unenviable admix of all three. The film told of the friends and enemies the Beatles’ manager had found in his surreptitious travels as a secret homosexual, and prominent among the enemies was a malignant, little-known figure named Dizz Gillespie.

I vaguely remembered the name: Brian Epstein’s sadistic, hustling, American-born gigolo, with whom he’d become infatuated in London in early 1965. Epstein assistant Peter Brown’s tell-all book The Love You Make had told, if not all, then much about this character and his extortionate exploits.

Dizz was an aspiring actor-singer in his early twenties, with dark hair, mischievous eyes and an impish, upturned nose. Brian was so taken with him that he seized upon Dizz’s phantom acting career to play Svengali. Brian had this act down pat. He signed Dizz as a NEMS artist and arranged for a new wardrobe. A press announcement was sent out, and Dizz’s picture appeared in several London papers as Brian’s new discovery.

Epstein paid Gillespie’s debts and provided him with drugs. Sometimes they did drugs together. “More often than not these drugged, drunken nights ended in some sort of unhappy confrontation,” Brown wrote. “They ran from simple arguments to all-out fistfights, which included breaking vases and mirrors. One night, unhappy with Brian’s largesse, Dizz worked himself into a rage. When Brian ordered him out of the house, Dizz raced to the kitchen, grabbed the largest knife he could find, and held it to Brian’s jugular vein while extracting an additional sum of money from Brian’s wallet.”

Gillespie’s knife spared the vein but severed the affair. But only for a while. He reappeared in August of 1965, when Epstein was in New York just prior to the Beatles’ Shea Stadium concert. Through an intermediary, Epstein’s New York lawyer Nat Weiss, the young hustler demanded $3,000 to buy a car and disappear. In exchange, Brown says, “Dizz agreed to be kept locked in a hotel room at the Warwick Hotel on Sixth Avenue—with a private guard hired by Nat—until the Beatles and Brian left town.” (It may have been more than simply the enormity of the event that accounted for Brian’s evident nervousness in the Shea concert film.)

It was another year before Dizz materialized for the last time. Epstein and Weiss were in Los Angeles, where the Beatles were playing the penultimate date of their final tour. Gillespie contacted Brian and sweet-talked his way into an evening of romance. The next morning Epstein and Weiss returned to their quarters at the Beverly Hills Hotel to find their attaché cases missing.

Brian’s attaché case was a witches’ stew of enormous ramifications. First, there was his large and questionable supply of pills, obviously the property of a junkie. Then there were half a dozen or so billets-doux containing explicit references to his conquests, along with Polaroid photographs of his young friends. Lastly, there was $20,000 in brown paper bag money skimmed from concert funds to be distributed as a bonus. The revelation of any of these items would make John’s “Jesus” furor seem like an Easter pageant.

Weiss soon received a blackmail note demanding $10,000 for the return of Brian’s personals. The briefcase was later secured, along with a luckless Gillespie confederate, in an elaborate sting devised by Weiss and a Los Angeles private eye. But the pills, the letters, the photos, and much of the money remained missing—as did Dizz Gillespie himself. Back he had stolen into his personal hole of obscurity, never to reappear in the Beatles’ narrative.

We know what became of Brian Epstein after that. On the night of August 29, 1966, he was somewhere in San Francisco, sick and defeated, as the Beatles played their last concert. And for the brief remainder of his life—he would be dead almost precisely a year after that night—he functioned, with increasing difficulty, under the unrelieved threat of blackmail and exposure.

Anyway, the screening ended, and I went to the restroom. I was alone, thinking about the movie, until the door opened and the next urinal was occupied by the gray-haired, tan-skinned man whose cigarette I’d lit in the standby line two and a half hours before. We exchanged glances and nods and did our business in silence.

“What did you think of it?” the man abruptly asked.

“I thought it was terrific,” I said. “I never saw anything quite like it.”

There was something in the stranger’s voice. Bitterness, it sounded like. I looked up.

He zipped up, and with a flush he was gone.

Media Mentioned in This Post:
The Brian Epstein Story
The Love You Make

(If you purchase via these links, Mike receives a small kickback from Amazon, which helps pay for the upkeep of the site. Thank you!)