ED PARK • Beatles fan and litblogger (and novelist) Mark Sarvas catches a curious NYT juxtaposition—the obituary for Richard Poirier mentions his Beatles essay, and what do we see in the margin?

Much to mull over. I was most struck by the contrast between Paul’s and Ringo’s attitudes:

1) “That’s what you want,” [McCartney] told me. “You want people to get engaged.” McCartney sees the game as “a natural, modern extension” of what the Beatles did in the ’60s, only now people can feel as if “they possess or own the song, that they’ve been in it.”

2) “It took me a while to understand downloading,” [Starr] said. “The last record was a wristband.” (His 2008 album, “Liverpool 8,” was released in the unlikely format of a USB drive that doubles as a bracelet, as well as on CD and MP3.) “The game is the biggest thing in the world right now, they tell me.” 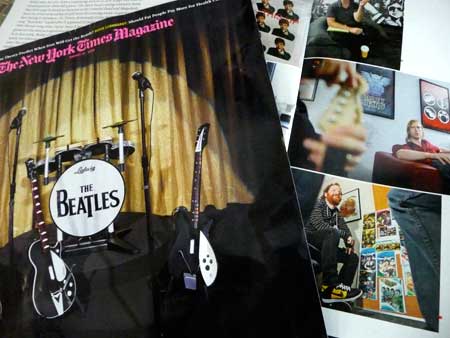