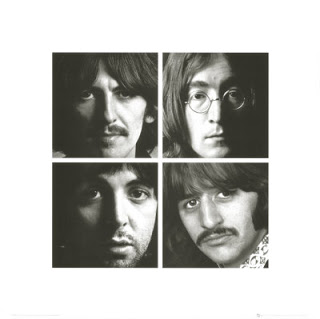 Black and white from White

NANCY CARR • I can’t resist highlighting another recent George Starostin review, this one of The Beatles. Every time I read his reviews, especially his reviews of the Beatles’ work, I’m floored again by the fact that he’s writing and publishing for free writing about music that’s better than 90 percent of today’s paid music journalism. While apparently working a day job as a linguistics researcher at a university. Call it slacking, call it idling, call it a hobby, call it anything you like—it’s great.

You can read his whole review here: http://only-solitaire.blogspot.com/2012/05/beatles-beatles.html

Perhaps the best review of the White Album?

One of the many reasons I love this particular review is that he so ardently defends The Beatles as a double album. Here’s a taste:

“As I try to recollect some of the oldest, possibly silliest, but also most intriguing impressions of the record, one thing that keeps surfacing is the contrast of the utter whiteness of the album sleeve with the sheer number of songs printed in small type on the back cover. That long, long stretch for Side B in particular — the whole «MarthaMyDearI’mSoTiredBlackbirdPiggiesRockyRaccoonDon’tPassMeByWhyDon’tWeDoItInTheRoadIWillJulia» thing had something freaky to it. You knew it wasn’t a de-jure concept album, but somehow even the way all these titles were condensed in one small area of the cover suggested some sort of happy family unity. Then you threw on the album, and there were all these little links like ʽWild Honey Pieʼ, and seamless tran sitions from one song to another, and ultra-short pauses between songs that did not have actual transitions, and the songs were all so different, yet somehow seemed to belong together.
Relistening to The Beatles now only reaffirms that old feeling. The sequencing of the songs, and the manner in which they flow into one another, is almost as important an ingredient as the songs themselves. The Beatles is, indeed, a smorgasbord of musical styles, but, more importantly, it is a smorgasboard of moods, and the different ways in which those moods replace one another over the album’s ninety minutes work magic on one’s psychics…”
Right off the bat, we have the reckless, joyful (but also notably tongue-in-cheek) rock’n’roll party mood of ʽBack In The USSRʼ contrasted back-to-back with — «pacified with», I’d say — the soft, na tural, acoustic tenderness of ʽDear Prudenceʼ. The tense, nervous flow and the dark psychedelic string coda of ʽGlass Onionʼ replaced, in a flash, by the upbeat bounce of the merry ska piano of ʽOb-La-Di Ob-La-Daʼ. The unexpected transformation of the mysterious, but clearly ironic ʽBun galow Billʼ into the dead-serious cosmic despair of ʽWhile My Guitar Gently Weepsʼ. Once we get over to the second side, the songs get generally shorter and are so densely packed that, with just a little bit more effort, the whole thing would have turned into a never-ending medley, some thing that the band would actually realize on their last album. ʽI Willʼ and ʽJuliaʼ, the album’s most openly romantic numbers, complete the side in a competing manner — no better comparison in the Beatles catalog of the difference in John and Paul’s approach to saying «I love you».”