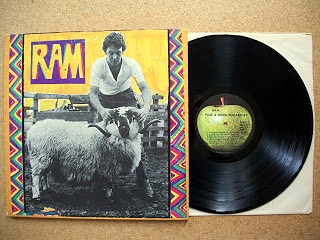 I thought critical opinion had largely come around to appreciating Paul and Linda McCartney’s Ram, 41 years after its release, but apparently not. It’s true that allmusic.com gives it five stars, having inched its rating up over the years, but a couple of reviews of the remastered album, due out later this month, are déjà vu all over again.
The latest issue of Qmagazine gives the remastered album 2 stars. For context, the previous issue included a rapturous 5-star review of the reissues of the Human League’s Dare and Fascination albums, and called Lana Del Ray’s Born to Die a “Must Buy” and “one of the essential albums of the last few months.”
In this context one must be grateful for Mojo’s 4-star rating, even if it comes with the most backhanded 4-star review I can recall. In it Danny Eccleston calls the album “Macca’s geegaw,” refers to “DVD gubbins” in the deluxe package, and misquotes “Too Many People” (“You took your chance and you broke it in two” for “You took your lucky break and broke it in two.”)
Sheesh.
Now let me clarify that much as I love “Ram,” I’m not a wholesale apologist for McCartney or his works. Some of his public actions and pronouncements make me cringe. I believe a good number of the stories of his being difficult and overbearing to work with. He’s done songs I wholeheartedly detest and would gnaw off an appendage to avoid hearing again (“Ebony and Ivory” and “The Girl is Mine” are leading examples). At least one whole album, “Pipes of Peace,” has, in my opinion, not a single song on it worth salvaging.
But “Ram” deserves better than 2 stars, and deserves better than a 4-star review larded with snark. It’s doubly depressing to see this happening as the same magazines give glowing reviews to albums that are unlikely to be remembered in 40 weeks, let alone 40 years.
Here endeth the rant. Time to cue up “Smile Away” and lighten up.