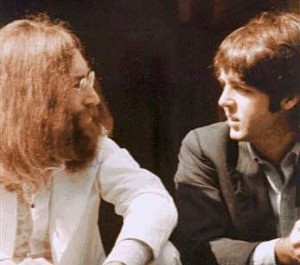 Since we’re considering Lennon and McCartney, everything is maddeningly complicated. Presenting them as opposites or complements overlooks all the ways their music overlaps, and focusing on a single theme they treat musically necessarily involves disregarding much of their work. This, then, can only be one angle on these complex musicians. But overall it’s true that as a solo artist Lennon wrote more songs about holding people at bay and McCartney more songs about drawing them in.

Lennon’s Plastic Ono Band is essentially about rejection – the experience of being rejected (“Mother”), and the action of rejecting (“God”).  “God,” in particular, is a litany of things Lennon doesn’t believe in.   What he does believe in is covered in two lines, and circumscribes a very small area: “Yoko and me / And that’s reality.” Regaining sanity after the band’s breakup seems to require shutting out most of the outside world.

Imagine softens this a bit – but only a bit. The title song offers a vision of the whole world becoming one, but makes it clear that an entrance exam must be passed: “Imagine no possessions / I wonder if you can.” The listener is addressed as one standing outside the beliefs the song articulates, and isn’t so much invited to join in as extended a possibility overlaid with doubt: “I hope someday you’ll join us.” This dynamic – “we” are already imagining no possessions, no heaven, etc., and are wondering if it might be possible for you too someday – has for me always rather cut against the grain of the song’s apparent intention.

Not so in Imagine’s “Gimme Some Truth,” Lennon’s great song about rejecting toxic politicians and power brokers: nothing diminishes this denunciation of dishonesty. And in the single “Instant Karma,” my favorite Lennon solo song, he manages to reject behaviors without rejecting people, and without softening his call for positive change.

But when Lennon moves from addressing people as a group to writing about intimate relationships, his songs tend toward extremes of dependence or rejection. Imagine’s “Oh Yoko” is one of the most intense depictions of neediness ever committed to vinyl (“In the middle of a shave I call your name”). The same album’s “How Do You Sleep?” is an astonishing enactment of absolute rejection, as Lennon acidly derides McCartney’s life and music.

There’s very little middle distance in Lennon’s solo songs, if I may so express it. It’s hard to find many people in them other than a specific few being loved or hated and the multitude being talked to as a group (“Power to the People,” “Working Class Hero,” etc.). And this doesn’t change much over the course of his solo career.  Double Fantasy’s “Woman” and “Just Like Starting Over” are clearly about Yoko Ono, while “Beautiful Boy” is addressed to Sean Lennon. And part of setting things to rights in “Cleanup Time” is banishing bothersome people from the charmed circle: “No friends and yet no enemies / Absolutely free / No rats aboard the magic ship / Of peace and harmony.”

McCartney expresses rejection musically too, but much more rarely and ambivalently. Ram’s “Too Many People” criticizes Lennon for “preaching practices” and taking his lucky break and breaking it in two, but adds “This is crazy and maybe / it’s not like me.” Only in this song and the same album’s “Dear Boy,” directed at Linda’s ex-husband, does McCartney come anywhere near the sharp personal criticism Lennon takes to the limit in “How Do You Sleep?” and Walls and Bridges’ “Steel and Glass” (which targets Allen Klein).

Much more typical of McCartney are songs that address the middle distance, that invite hearers to participate in something the speaker is also doing or enjoying. “Rock Show” on Venus and Mars, “We’re Open Tonight,” on Back to the Egg,  “Take It Away” on Tug of War, and  “Dance Tonight” on Memory Almost Full are all songs inviting the listener to a party.  Partly this kind of song reflects McCartney’s identity as a performer: he needs an appreciative audience in a way Lennon didn’t.

Beyond these let’s-have-fun-together examples are a number of other invitational McCartney songs. Most famously,  “Let ‘Em In” advises the listener to open the door to a laundry list of people seeking admittance (Sister Susie, Auntie Jin, Martin Luther, etc.).  This theme gets a more serious treatment on songs like “Don’t Let It Bring You Down” (London Town), “Somebody Who Cares” (Tug of War), and “Put It There” (Flowers in the Dirt), all of which urge the addressee to engage with the speaker instead of retreating from human contact. “Fine Line,” from Chaos and Creation in the Backyard, even invites someone who’s been rejected to return: “Come home brother, all is forgiven / We all cried when you were driven away.”

Certainly one can’t conclude on the basis of such invitational songs that McCartney is actually more friendly or forthcoming than Lennon; despite his public persona, McCartney seems more guarded and protective of his privacy than Lennon was. But it does seem fair to conclude that for McCartney loneliness and its alleviation have a social dimension they don’t typically assume for Lennon. Lennon’s magic ship includes “no friends and yet no enemies,” only a very select crew. Contrast that with the mainly-McCartney-written “Yellow Submarine,” which hyperbolically declares that “Our friends are all aboard / Many more of them live next door.” Indeed, several of McCartney’s good-time invitations underline their all-inclusiveness: “We’re Open Tonight” asks the listener to “bring all your friends” and repeats “come one, come all.” And after stating “you can come on to my place if you want to,” “Dance Tonight” emphasizes that everybody is going to dance and have a good time, and “everybody” appears more than twenty times in this relatively short song (yes, I counted).

I suspect it’s mainly personal temperament that determines whether you prefer Lennon’s keep-em-out or McCartney’s let-em-in songs, and to what extent you appreciate both. To fully enjoy Lennon’s songs, you have to see yourself as one of the people he wouldn’t exclude. To fully enjoy McCartney’s, you need to be feeling playful (the come-to-the-party songs) or potentially vulnerable to loneliness and exclusion (the reassuring songs).

I like both, but confess to coming down on the McCartney side more often (this will be no news at all to regular readers of this blog). When I hear “Let ‘Em In” I think of the stories of McCartney knocking on Lennon’s door at the Dakota and being turned away. I can’t support with facts my hearing a reference to Lennon in the song’s “brother John,” but I hear it anyway and hope it’s really there. Hearing it there accords with my feeling that shutting people out should be done sparingly, despite the risks entailed by letting them in.