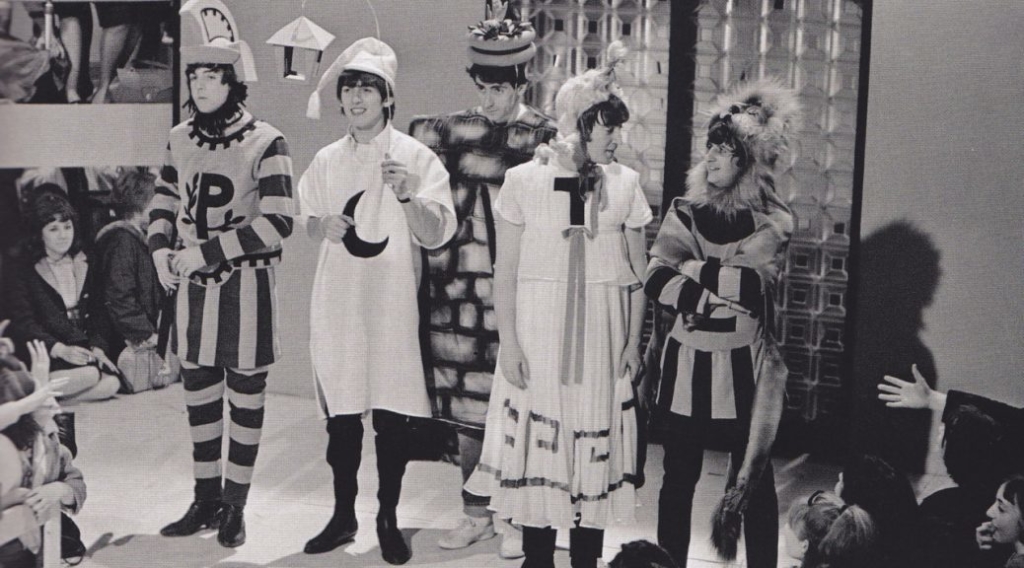 Folks, I’m increasingly churlish on this site, and it bugs me. It bugs me because I love The Beatles, individually and as a unit, love what they made, love their time and place, and like all of you. My churlishness comes from the exact opposite place that it seems to come from; it must seem critical, but it is…fundamentally positive and supportive? There’s something important I haven’t expressed well enough, despite all my words, and I’m going to try to address it here.

After a certain number of hours logged listening, reading, and thinking about The Beatles — or any other cultural topic — one should move past mere fandom. Fandom is very, very small, and its escape from the realm of childhood has not been entirely good for us. One’s love for an artist or a band or an LP may start out as pure pleasure-seeking, move into a form of identity, mature into a kind of secret personal language, mellow into comfort…but it can’t stay there. There’s a deeper, and more universal relationship that should emerge. If it does, one’s love is an engine for personal growth; if it doesn’t, it’s a way to hide, to stay small, to ward off others and hold yourself back.

Wanna see a million people caught in this trap? Go to Comic Con. If you go to Beatlefest, as Nancy and I did several years ago, you’ll encounter a neverending subdivision of fandom as narcissism.

I say all this as a man who just accompanied his adult wife to Disneyland, where every single person picks an avatar from Disney’s ever-expanding roster, and assumes that identity with the help of lots and lots and LOTS of expensive costumes, t-shirts, and other merch. Fandom may well occupy the space once reserved for religion, as Lennon saw back in 1966.

But just like with religion, at a certain point one must look at The Beatles, or a Beatle, or a song or record or poster or movie and feel an “I-Thou” connection. An intense sense of connection without boundaries; of mutuality; of wonder; of growth. You’ll know it when you feel it. For me, it often comes out as statements about “Can you believe this all happened? That those particular guys met, worked together, made this music? And in those perfectly right times?” and so forth. The I-Thou state accepts all of them, all the music, all the squabbles, all the events, as they were/are. It feels like a blessing. It is the opposite of all the wrangles we have in the comments, and any opinion I express in the comments is a wave, while the gratitude and pleasure and wonder — the I-Thou — is the ocean beneath.

At some point, one’s interest in the Beatles should widen out, because it becomes clear that The Beatles are everything and in everything and everything is in them. The good and the bad, the pleasing and displeasing — you can look at it all and, yes, have opinions, but the opinions grow weaker and weaker because you’re feeling more and more “I-Thou” and less and less “I-I” or “I-It.”

The internet doesn’t seem to encourage “I-Thou.” It definitely encourages “I-I” and “I-It,”, and that’s why fandom since the arrival of the internet has become more and more divided, divisive, hostile and toxic. “They took my childhood away when they made the Jedi a girl.” The glorious fact of a Star Wars franchise, or a Marvel Universe, or The Beatles, dependent as they all were/are on a million chancey things happening just right—on the internet, that’s all taken for granted. In favor of a bunch of people strengthening their own self-conceptions via fandom. So people insist that John and Paul never, ever, couldn’t possibly have had sex; or are positive they did and hunt for clues to “prove” it — not in a spirit of knowing these two human beings more fully, but one of claiming them for their team, whatever that is and might mean. But John, or Paul, or all four of them separately or together, are already like you and not-like-you; they are already yours; and not-yours; they are other, but not different, if you live in the “I-Thou” space with them. You must be in relationship with them, which softens and enlarges you, and allows you to escape the comfy prison of self.

This Substack post from Justin E. H. Smith is about the humanities in general, and while I don’t agree with all of it, some of it resonated mightily. While it’s about humanities and the university, I think you’ll see why I’m quoting it.

“Here is why,” Professor Smith writes, “I actually think humanistic inquiry should be defended: because it elevates the human spirit. Nothing is interesting or uninteresting in itself in a pre-given way. What is of interest in studying a humanistic object is not only the object, but the character of the relation that emerges between that object and oneself. What emerges from humanistic inquiry is thus best understood as an I-Thou relation, rather than an I-It relation.”

MG here: I actually think that music stimulates this I-Thou relation more easily than images or words; and the historical distance retards narcissism; so the study of The Beatles is actually quite likely to fall into an I-Thou relation. If you want it.

“Admittedly, in principle such a dyad could be achieved with Marvel comics as much as with Nahuatl inscriptions. But in reality the institutional and cultural context in which pop-culture-focused pseudo-humanities are studied ensures that the student usually remains at the level of I-I identity, which is not a relation at all but pure narcissism, or at best attains a sort of I-Us community, where he or she can bask in the like-mindedness of other comics fans: in other words, academic studies as an institutional buttress for what youth subcultures have always been perfectly able to achieve in a much more anarchic way. (Thank God there was no option for goth studies when I began college in 1990 — in any case I was already an expert.) Humanistic inquiry is not fandom; it is a basic category mistake to suppose that it is. Conversely, the indulgence of a young person’s prior identification as a fan can seldom result in humanistic inquiry, even if the object of her or his fandom is not in principle excluded from the list of humanistic inquiry’s possible objects.”

MG again: a lot of what I try to do on the site is not indulge people’s Beatle fandom — especially my own — to encourage a kind of humanistic inquiry, albeit a much looser and easier one than in a college seminar. I assume we’re all fans here, so let’s dig in. And my frustration with some of you stems from your resistance to anything larger than fandom. This is not your fault; it is the water we all swim in today. On the internet, everything is fandom, from politics to what type of car you drive (why on Earth do people defend Elon Musk? Don’t answer). The internet insists that fandom, corporate-owned, marketable, identity-reinforcing fandom, has to the primary relationship. “John’s my guy, so John couldn’t have kicked Stu in the head.” Or, “Paul’s my guy, so anybody who finds Paul’s lyrics substandard is no better than Rolling Stone in 1972.” It’s goofy; there’s so much more here. But you have to move past mere fandom to see it.

It is this emphasis on the cultivation of an I-Thou relationship to one’s object of study that also saves the present defense of “traditional” humanities from accusations of gratuitous high-browdom or thoughtless cultural conservatism of the sort for which E. D. Hirsch Jr. was rightly ridiculed a generation ago. It is not that there are some artefacts of human cultural creation that are timelessly superior to others, and still less that such artefacts have been more intensively produced in Europe. It is rather that you must latch onto something outside of and alien to the demotic culture that you have inherited and taken for granted in your early life, in order to have the sort of experience of radical difference that catalyses a full and deep second-person relationship to the object of your study.

This is why I’m endlessly hectoring commenters to step outside their demotic culture and learn more about the ever-more-distant time and place wherein The Beatles happened. Because it is that strangeness-to-oneself that allows for the I-Thou relationship. If you went to high school in a time and place where girls, or even guys, could make out without social stigma, you need to unlearn and loosen that portion of your identity before engaging with a topic like John and Paul’s sexualities. For those of us born in America, our Americanness is somewhat of a barrier — though the Beatles’ massive Yankophilia and most of them living in the States for large chunks of their lives makes the gap a little less wide. But time, and mores, and experience — just the fact that there was no online world — these are vast gulfs, and the only way to span them is to break free from the “I-I,” grow past the “I-It,” and into the “I-Thou.” The Beatles are other. But that’s what makes them worth studying, and so so thrilling, especially when you break through and begin to feel them as not-other.

The idea of study of an external object as an occasion for moral self-cultivation is one that was familiar in both the human and natural sciences across much of the early Enlightenment. Lorraine Daston vividly describes, for example, the transformations experienced by eighteenth-century naturalists such as Charles Bonnet in the course of their observations on the life-cycles of aphids. If you stare at an aphid for days on end, your entomology becomes not just a science of insects, but also a practice of meditation, a spiritual exercise, if you will, in which the aphid plays a role that, in another century and another tradition, might also be played by a crucifix.

So here it is: the study of the Beatles as an occasion for moral self-cultivation. A practice of meditation. A spiritual exercise. This is why I keep this site up, as expensive as it is, and why I endlessly wade into the comments trying to force them to be better, deeper, more accurate, more personal thus more universal, less narcissistic, less “internetty.” Because we all have been given an opportunity here; our interest gives us the possibility to learn and improve, not simply reflect our tastes, or attack/defend.

The humanities, when they are doing what they are supposed to be doing, are concerned with the awakening of such moral consideration for objects of human creation, past or present, where previously we would not have noticed that this consideration was merited. Traces of human intention transferred into artefacts or texts — these cry out for attention too, and it is the moral calling of the humanist to pay it.

So let us all be Beatle fans, sure, but more than that, humanists. Those who pay attention and see the “traces of human intention.”

A few words about the latest Rolling Stone list…

The Worst Beatle Waxworks Ever