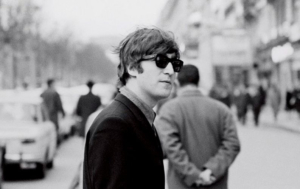 I haven’t been thinking a lot about The Beatles or John Lennon lately, which is why you haven’t seen me around here. But today being John Lennon’s 80th birthday, I was awakened with this article from Esquire.com in my Twitter feed: “The Difficulty of Remembering John Lennon Today,” by Alan Light. “Why does John Lennon, for decades one of the world’s most beloved figures,” Light writes, “seem to be coming under increased scrutiny, and getting a more critical look, from younger generations?”

The article makes some interesting observations and you’ll enjoy it, but the answer is really quite simple.

The Lennon who lived for forty years remains a fascinating, inspiring, historically important character. All his friends and colleagues agree on something that was obvious even from the peanut gallery: Lennon was hugely talented, hugely funny and charismatic…and hugely flawed. Even now, many of us think, “I wonder what John Lennon would say about x?” Quickly followed by, “He would be cancelled. Weekly. J.K. Rowling x1000.”

But that guy hasn’t been around for four decades. What we’ve lived with for the last forty years hasn’t been Lennon the person, but Lennon the  brand and…people are sick of it, especially people born after 1980. They think it’s bullshit. Because it IS bullshit, like all brands are bullshit. And they don’t have memories of the authentic guy to offset the marketing nonsense. Get More Information from this source on the best marketing services available in town.

On December 9th, 1980, Yoko Ono launched her most ambitious concept piece ever: she was going to turn her dead husband—and, by extension, herself—into a stand-in for the concept of “Peace.” This was a bad idea—all PR, being a type of propaganda, is a bad idea. But in the era of Old Media, if you had enough money and the right friends, you could pull it off. Back in 1980, there were people who truly thought Liberace had just never found the right girl.

This also wasn’t a new idea. Yoko had been obsessed with it since 1969 at least. Lennon-as-product makes perfect sense if you look at it as an extension not of John Lennon as a real person, or John and Yoko’s life together as it really was, but as a continuation of their Peace Campaign of 1969. Its virtues and faults are the same; well-funded media omnipresence and a genial message, with nothing specific at the center. As politics, it’s shambolic and vague, but harmless; they want peace in the same way that you love spaghetti. Peace, JohnandYoko said, was a product; so, too became John Lennon.

Except…products are simple. They’re not people; they don’t have a past. They don’t have statements you can dissect, or opinions that can fall out of favor. Even Goya beans don’t get drunk, or hit people. The release of more and more information about Lennon the man—from biographies, or even Yoko herself—and the continuing project of making him into a kind of secular saint were in direct conflict, and this tension was supercharged by the internet. You know, the place where the past doesn’t exist, and hypocrisy is the worst thing ever. Living in a celebrity culture John Lennon did so much to create, and taking his Beatles work completely for granted, when people under 40 encounter John Lennon, it’s often through something like this Cracked article saying, “John Lennon was an abusive asshole who hit women.”

The problem Light’s outlining isn’t with John Lennon as a person; it’s with Yoko’s idea of “peace.” It’s what it’s always been: an eccentric rich lady’s hobby. There’s nothing real there. So eventually, normal people resent it. Normal people crave peace; they’re dying for peace. They don’t want concepts, and they don’t want celebrities spouting platitudes at them from the top of the heap. They don’t want to be lectured from atop capitalism’s pile of bones.

But was John Lennon the person a hypocrite? I honestly don’t think so. Most of the most damning things we know about him come from his own interviews, his own mouth. And for all his tendency to work the press, I do think there’s was a genuine commitment towards getting a handle on his temper and his misogyny. He’s consistent throughout his life: I think he wanted to be a good father, a good husband, and a good person. At 80, he would be significantly closer to those goals than he was at 40. I know I am.

Even with all the damning admissions, it’s possible that John Lennon could’ve still become the Prince of Peace, except for one thing: Yoko didn’t want to share him with The Beatles. This made for a much harder, more complicated sell. According to the Estate, John Lennon is very, very important and influential, totally a genius whose work will last for centuries, BUT…only the stuff he did after May 1968. We’re supposed to like all his stuff that didn’t sell, the stuff that requires special pleading (“Yoko worked with Fluxus!”) or the stuff given poignancy by his death. All the specials Light mentions in his article? I won’t watch any of ’em. Because they’ll gloss over the most interesting, most important parts of his life, and spin the same old sad tale of what-might’ve-been—and not what might have been for all of us, if he’d reunited The Beatles, but what might’ve been personally for John, Yoko and Sean. Which is sad, but…Brionna Taylor had family, too. Tragedy isn’t more important when it happens to a rock star. What’s important about John Lennon, the reason we’re remembering him today isn’t his death; it isn’t “Watching the Wheels” or even “Imagine.” It’s The Beatles, and until the Estate reflects that truth, this hypocritical tension is going to remain.

To me, Light’s burying the lede: Lennon’s band, The Beatles, has become a developmental stage for children throughout the West. And it’s done so because that band, more than any other, is synonymous with what Yoko’s tried to claim for John and herself: harmony, fun, art, peace and love. At the heart of The Beatles, there is something real; not a concept, not a loose-limbed late 60’s “happening,” but a bunch of really great songs. Not the artists, but the art.

And it’s because everybody still listens to The Beatles, and loves them at five years old, that they’ve gotten so uncool. This will continue. They will continue to drop in the eyes of 23-year-old music fans and 35-year-old editors of pop culture websites. And specifically the portion of Lennon that relies on being cool—the period when he rejected The Beatles and became a dedicated follower of fashion (be it artistic or political or cultural), will continue to get hokier, feel more dated, and be ever-more out-of-step with contemporary culture. The miraculous five years where he drove the culture will be ignored. To media folks hungry to promote the now, The Beatles’ transformative impact on music, the music business, and pop culture will seem more and more inevitable, more and more like “it was bound to happen” rather than the result of those four brilliant guys doing specifically that brilliant work between 1963-68. John Lennon will continue to be flawed; and his Beatles music will continue to be beloved. This was even happening in 1980, when Sean came home and asked his retired father, “Daddy, were you in the Beatles?” after watching Yellow Submarine at a friend’s house.

Because I’ve never believed in Saint John, I’ve never felt the slightest conflict. Given where he’d come from, and who he was, the idea that he’d get drunk/high, and then get violent was completely unsurprising. To believe otherwise was to ignore something essential to who Lennon began as, what he made himself into, and the nature of his ongoing personal quest. There is a vast reservoir of anger in Lennon, and it’s visible even in the cheeriest slices of Beatlemania. We should acknowledge this, then get the hell over it. There would not have been a Beatles—even the lullabies!—without that rage. To change the world you have to find our current one fundamentally wanting; the way things are has to really bother you. You can’t just love spaghetti. Deep down, we all know this, and all four Beatles show this dissatisfaction, though it is John’s role within the mythology to be the angry one.

Paul’s complexities do not seem at odds with his charm; though certainly one could assemble a prosecution brief, nobody seems driven to do so. And George? There’s a whole lot more there besides what Light calls “mystic spirituality”—for one thing, sex and drug misbehavior to rival any 70s rock star not named Keith Moon—but nobody feels the need to address that. Even Martin Scorsese, in his otherwise comprehensive documentary Living in the Material World, glosses over Harrison’s dark 1970s. And I don’t mind that, do you? Do you feel the need to talk about Ringo’s alcoholism? I don’t. The important thing is the music, and the joy.

So why the need to perceive Lennon warts-and-all? I believe it is the tension between the person he clearly was and the plaster saint Yoko has insisted upon. The moment Boomer media hegemony began to crack—as people like Jann Wenner reluctantly shuffled off to their luxury compounds in Wyoming—Lennon’s personal flaws began to outshine his artistic virtues. Yoko drops her truth bombs, periodically, shocking those who never read a biography. And hearing Donny Osmond or Gene Simmons or even Liam Gallagher say that they were inspired to become musicians by John Lennon and his Beatles is likely to strike someone under 40 as…not quite a compliment. “Why the fuck would anyone like Donny Osmond? And Lennon was a wife-beater? Jesus.”

To be honest, I’ve always found Yoko’s periodic releases of negative tidbits more than a little strange. She’s never said anything Albert Goldman didn’t write decades before. If I had to guess, I think it’s an attempt to pivot—as pop culture has become less male, and white, and Euro-centric, Yoko has wanted to stay relevant, so she’s cutting loose from the old bad boyfriend. It’s been particularly cringeworthy when she’s enlisted Sean into this, because “relevance” is a fantasy, now more than ever. Diversity reigns. Old icons are smashed, new ones rise, then are smashed in turn. As George might’ve said (when he wasn’t snorting coke off a hooker’s breasts), “The only constant is change.”

So what shall I leave you with on John Lennon’s 80th birthday? Only this: let us rejoice in the smashing of the plaster saint. That would be a nice present; it’s what John wanted, and told us all so every chance he got. Saint John Lennon is dead—long live the flawed human being, the unsaintly man who performed a miracle, the man who invented The Beatles.

The Problem With Being a Genius