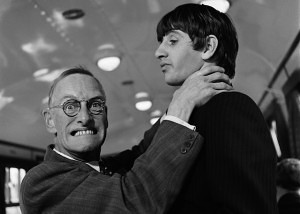 Some boys have trouble expressing affection.

Charles Taylor has written a marvelous appreciation of “A Hard Day’s Night” for the Los Angeles Review of Books. He just gets so much right here, and it’s stuff that I’ve felt myself but never read anywhere else. Here’s the opener to get you started:

HOW WOULD YOU REACT if there appeared in front of you a flesh-and-blood vision of everything you ever dreamed life could be? What if you could, at the same time, be your distinctive self and an irreplaceable part of a greater whole? What if that greater whole showed you how work could be inseparable from pleasure? What if camaraderie and romantic love could sustain you while you were working like a dog? What if there was so much happiness available to us that we needed eight days a week to take it in? What if something as simple as walking down the street or riding a train were a gateway to the sort of exhilaration that lifted you off the ground?

The overwhelming cultural meaning of the digital age is segregation, the endless dividing and subdividing of the pop audience into niche markets and genres, the ruthless realization of a separation that defeats the possibility of the unity promised by the idea of popular entertainment. Every rock critic or former rock critic, every fan or blogger who proclaims the empowering democracy that the digital age has made possible is in fact denying the possibility for the kind of pop moment that, as with Elvis or the Beatles or punk, called everything into question, made us ask what it was we wanted of our life, and fed that energy into political and social ways those changes could be realized. They are celebrating their own irrelevancy.

Taylor on A Hard Day’s Night; Howard Hampton on everything else

There’s so much more there, I’m having to restrain myself. Go read the rest, and while you’re at it, read Howard Hampton’s thoughts on the film as well.  He does a great job locating AHDN within the larger cultural ferment of the era — exciting changes in comedy and fashion and film (auteurism and the New Wave), increases in sexual freedom and class mixing, the whole underground bubbling up to the surface — something we do here a lot, and will do more of. (Maybe I’ll write a post about Fellini and The Beatles — has anybody else noticed that AHDN shares that same silvery brilliant black and white as La Dolce Vita and 8 1/2? Kate says it’s probably the same film stock, but I can’t figure out how to find out.) For now, let’s leave it with Hampton’s quote from Susan Sontag’s diary, circa 1964: “Pop art is Beatles art.”