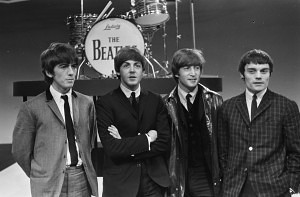 Did Jimmy leave a secret legacy?

On June 22, Chris Carter’s “Breakfast With the Beatles” unveiled an unreleased Beatles track that has fans buzzing: the full 42-second song that blares only for a few seconds from Ringo’s transistor radio during the train scene in A Hard Day’s Night. Thanks to Chris’ kind permission, we were the first site to bring the track to the web. Yay, Dullblog.

[First, quoting commenter @ODIrony:] “Also, it’s well documented that train scenes were done first. That would argue that the scene with the upper class twit would have everything needed for it set before production.”

There actually would have been no need for the radio music at that point, as sound effects are added in post-production. The film wrapped in late April, so they might have recorded it after that. In fact, there’s an intriguing entry in Lewisohn’s book for June 3, when they spent the afternoon at EMI rehearsing with Jimmy Nicol, though Lewisohn says it was not taped. A couple of people have remarked that the drumming in the radio clip doesn’t sound like Ringo, so… could it be that a few stray seconds of the Nicol rehearsal were recorded?

Wow! Now that’s a theory to ponder on your day off. Here is the complete entry from Lewisohn for June 3, 1964, just in case your copy of The Beatles Recording Sessions isn’t handy:

Studio Two: 3.00-4.00pm. Rehearsing: ‘I Want to Hold Your Hand’; ‘She Loves You’; ‘I Saw Her Standing There’; ‘This Boy’; ‘Can’t Buy Me Love’; ‘Long Tall Sally’
This session, a rehearsal only was not recorded. During a morning photographic assignment on this day Ringo was taken ill with tonsilitis and pharyngitis, just 24 hours before the group was due to leave for a five-country concert tour. It was too late to cancel so Brian Epstein and George Martin came up with a temporary replacement, 24-year-old Jimmy Nicol, a session drummer. Nicol was relaxing in his west London home when Martin’s call came through, inviting him to be a temporary Beatle, subject to a hurriedly arranged afternoon rehearsal at Abbey Road.

They rehearsed sex songs (the Beatles’ standard stage repertoire at this time comprised of just 10!) and Nicol passed the audition. Twenty-seven hours later, John, Paul, George and Jimmy were on stage in Copenhagen, giving their first concert.

Press inquisitiveness looked like a posing a problem however. A large group of journalists had congregated at the studio and so anxious were they at catching a glimpse of the new Batle before the rehearsal that they were blocking the side entrace to the studio. “Paul came up to me,” recalls studio assistant Terry Condon, “and said, ‘Sir Terrance,’ — he often called me that — ‘we don’t want them all here, getting in the way. Tell they that Jimmy’ll enter through the front and then bring him in around the back.’ So I beckoned one reporter aside and whispered, ‘Don’t tell the others, but he’ll be coming in through the front.’ Of course all the others followed him there, Jimmy arrived unnoticed and slipped in the back way. We all had a good laugh about that.”

What a great book this is; and what an interesting theory — thank you dear Glanglemutton! Not only may we be hearing an unreleased Beatles track, it might contain a Jimmy Nicol Easter Egg as well!