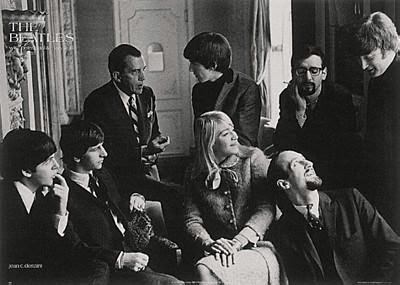 This just begs for a funny caption.

DEVIN McKINNEY  •  The following was spotted recently in the liner notes of Peter, Paul & Mary’s LP See What Tomorrow Brings, released December 1965, simultaneous with Rubber Soul. The notes spend needless time defending PP&M for not being “hip” like Dylan, or “electric” like the Beatles; and then assuring us it doesn’t matter ’cause they do their own thing anyway. Then you get to this:

Their message is the same as that of any artist through the centuries, a sermon of truth and beauty in the context of their times. And the fact that PP&M can appreciate the Rolling Stones or even the Beatles is added proof that PP&M are in touch with their times.

The Beatles, incidentally, call them Pizza, Pooh and Magpie. “Let’s face it,” Peter said one day, throwing his hands into the air as if he had a gun in his back. “Their magic is bigger than our magic.” Maybe so, but it doesn’t really make any difference. PP&M aren’t failing at being the Beatles, they’re succeeding at being PP&M. Every album they’ve cut so far has hit the top of the charts and this album is going to do the same. Whatever magic the Beatles have, it hasn’t detracted from the magic of PP&M.

“Pizza, Pooh and Magpie”? That has to be John. Peter is no less lovable for his objective assessment of relative magics.

P.S. I had the pleasure of meeting Mr. Yarrow some years ago, at a church gymnasium in New Jersey, long story, and he was every bit the superannuated folkie, every bit the non-phony.