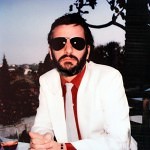 “All right, I’ll sing it for you…just this once.”

Help me, Dullbloggers, you’re my only hope…I was speaking to someone last week who was at a party in the Seventies with Ringo Starr which devolved into a singalong. I seem to recall there being a Beatleg out there with Ringo, George, and a bunch of partygoers warbling “Yellow Submarine.” Does anybody else remember that as well? I thought the track was on Artifacts III, but I looked on Bootlegzone and didn’t see it. Did I dream it? Ringo singing Yellow Submarine…given Ringo’s rowdy Seventies, how rare could that be?

At this same event, I was introduced to Peter Fonda who said he knew what it’s like to be dead looked just like he did in “Easy Rider.” (No, I wasn’t drinking, the guy just looks great.) When he heard I was working on a comic novel based on Lennon and The Beatles, he smiled and said, “Don’t forget about George Harrison.” The wry way he said it made me want to grab his lapels. “All right, Fonda–we’re not leaving until you tell me everything.” 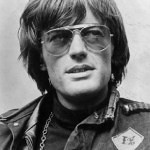 Peter F., then and now

Nearly every time I’ve talked to somebody who knew an historical figure–Charlie Parker, for example, or John Belushi–they’ve told me things a million times more interesting (and insightful) than the official version. But not wanting to imperil my wife’s career, I simply nodded and said I’d do my best.