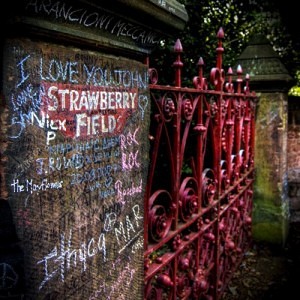 …Of all Beatles recordings, “Strawberry Fields Forever” is known for being among the most complicated and difficult to record. It is also known that the song changed shape in the studio not once but several times. Both facts are certainly true. Take one, recorded on this night, was not only magnificent but as far fremoved from the final version as possible, the only similarity between its and the record being the song’s mellotron introduction. This instrument was the precursor of the string synthesizer and it contained tapes which could be “programmed” to imitate another instrument, in this instance a flute. “I remember when the Beatles first brought in the mellotron,” says Jerry Boys. “It was made mostly for producing sound effects, but it also had flutes, brass and string sounds on it. The Beatles used it in a way nobody had ever thought of. “It was a new instrument then,” recalls Geoff Emerick. “John had one of the first ones, in a polished wooden cabinet. In the end the Musicians’ Union tried to stop manufacture because of the way it reproduced the sounds of other instruments.”
During the course of this long and highly inventive evening the Beatles recorded the rhythm track, and a good many overdubs, for take one of the song. By the end of the night it sounded like this: simultaneous with the mellotron, played by Paul, was John’s first—and stunning—lead vocal, followed by George’s guitar, Ringo’s distinctive drums (with dominant use of tomtoms), maracas, a luscious slide guitar piece, John’s double-tracked voice and scat harmonies by John, Paul, and George. The song came to a full-ending with the mellotron. The entire take was recorded at 53 cycles per second so that it sounded faster on replay but still it lasted only 2.34.”

So Paul played the mellotron beginning, but no mention of who invented it. And here’s Strawberry Fields Take 1, for your listening pleasure.