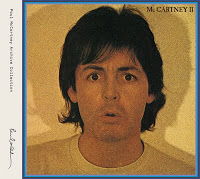 Paul McCartney is an amazing dude. Here I am, positively obsessing over his stuff for 40 out of my 43 years, and yesterday I stumbled upon this great tune, which I’d never heard. “Blue Sway” has proceeded to dominate my consciousness for 36-going-on-48 hours.

Paul, please promise to use this awesome power only for good, never for evil.

Whatever else you want to say about the man (and there’s a lot to say, and we say it here) pop music just pours out of him. I feel very lucky to be living at the same time, and think the true outlines of his talent—the breadth and depth of it—will only be truly perceived after he’s gone. Lennon was also a giant in his way; and because each man was built, or grew, to this outsized scale, each was made incomparably greater by the goad of the other. So McCartney is cursed to be—like Lennon—a half-finished, heartbreaking masterpiece.

Because McCartney lived on, too often we only see his flaws, rather than the gifts which only seem to kindle the heartbreak. But the flaws come from this world—mortality, other human frailties—not from the talent, which is deep and clear and pure.

So enjoy Paul (and this song).