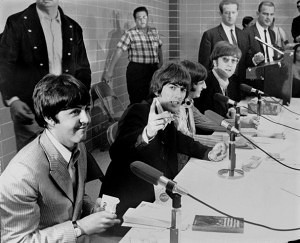 DEVIN McKINNEY  •  I’m a bit ashamed to say it’s taken me this long to listen to something I’ve had on the shelf for a few years—the audience recordings of the Beatles’ afternoon and evening shows at Memphis’s Mid-South Coliseum, midway through their final tour. The evening show is the famous one: Near the end of “If I Needed Someone,” the third song, a cherry bomb was thrown onstage and exploded. I remember reading that three teenagers, adolescent mischief-makers with no malign intent beyond literally making a noise, were detained by security.

I needn’t rehearse the back-story to this legendary moment. Readers of this blog will know all about the “Christ” comment, the resultant backlash in America, and the threats of death or at least “a few surprises” from the local chapter of the KKK. Suffice it to say, nerves were wound tight all around in Memphis on August 19, 1966.

The existence of these recordings, made by teenage fans with primitive equipment, was first reported in Rolling Stone in 2007; Apple was said to be pursuing the reels, without doubt so that it could prevent them from ever being publicly heard. But the owners resisted all offers (or threats) and one way or another the shows were bootlegged within a year. They first appeared under the title The Cherry Bomb Tapes, because that is what everyone remembers about the Memphis visit, and what everyone wanted to hear.

Though you think you’re prepared for the sound, it comes as an absolute shock. First of all, it is LOUD. It doesn’t sound like a firecracker, or a car backfiring, or for that matter even a gunshot. It sounds, more than anything, like the moment in Help! when the windswept Beatles are miming “The Night Before” and a bunker full of dynamite explodes, blasting the song to bits. Several girls near the microphone scream and shout incomprehensibly at each other: clearly, the Beatles weren’t the only ones with feelers out for disaster that night.

In the video above, the sound comes at 1:12. But it’s more shocking to hear it in sequence, after “Rock and Roll Music” and “She’s a Woman” and most of “If I Needed Someone” have come and gone, when you’re beginning to think the sound won’t really be audible after all, or if it is, it’ll be a pipsqueak. And then, cutting through the crowd, the music, the distance of decades: BLAM. Big, dumb, brutal, hungry, it is the sound of what Beatlemania became.

The Beatles, they and others have said, looked around at the sound to see if one of them had been assassinated—not a foolish fear in America in 1966. (Let alone in Memphis itself: Just weeks earlier, civil rights activist James Meredith, walking from Memphis to Mississippi to register black voters, had been shot down in broad daylight by Aubrey James Norvell, a Memphis man; and two years later, Martin Luther King would be killed there.) But kudos to the group for not seeming to miss a beat of their performance, and especially to John Lennon, who despite the blood surely pounding in his heart and head takes the mic to jauntily introduce the next song, “Day Trippah!”

Go here for a good article on the Beatles, Memphis, the last tour, and the cherry bomb tape as a prime instance of folklore made flesh. Though the writer and I disagree on a few points (the July 30 Tokyo show was pretty bad, but July 1 was a powerhouse), he makes a moving statement on the magic, sometimes frightening, rendered unto us by bootlegs that not only confirm legend but live up to it.