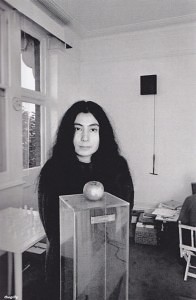 Browsing in a used bookstore last night, I came across this quote in Rolling Stone Raves: What Your Rock & Roll Favorites Favor (1999):

Yoko Ono: “No, I didn’t know any of [the Beatles’ music when I met John Lennon.] I had heard about the band, the mopheads or whatever. I knew that they were making a big impact on people, like a social phenomenon. I just never got around to listening to their music.” [1992]

My first reaction was “Wow.” I mean, I knew Yoko was no Beatles fan when she met Lennon, but I’m surprised that 1) she was apparently that unaware of their music, being in London in 1966 and that b) she uses the “mopheads or whatever” phrase in 1992.

I kind of admire her for putting that out there so uncompromisingly: she’s sure not varnishing her past reactions for a later audience. Maddeningly, I can’t find a good context for this quote, so I don’t know what else she went on to say (if anyone in cyber land does know, please respond!) I’d really like to think that her next line was “When I did listen to it, I was impressed with a lot of it,” but I’m not holding my breath.

As much as I appreciate her forthrightness, this quote also embodies what I find grating in Yoko’s persona.  It strikes the more-artistically-enlightened-than-thou stance familiar from snooty record store clerks, pompous rock critics, and know-it-all grad students.

That reference to “mopheads”also sounds somewhat defensive, as if Yoko is underlining that her attraction to John wasn’t based on his fame, that she was in no sense a groupie. And indeed, as an earlier post and discussion on this blog explored, Yoko’s attraction to John was in some sense that she was an anti-groupie: someone whose lack of investment in the Beatles made it easier for John to imagine leaving  the band.

The same page (300) of the Rolling Stone Raves book includes a quote from Paul McCartney that measures the distance between his attitude toward the band and Yoko’s. “I’ve been told I’m the biggest Beatles fan of all. I’m proud of what we did. We were a great band. Name me one better.” [1994]

Not hard to understand why they’ve never gotten along easily.