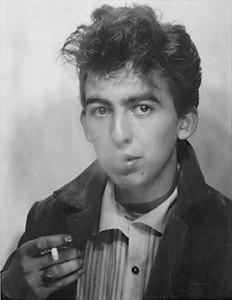 I had some thoughts re the recent George-is-overrated brouhaha…but I’m lazy, so instead I dug up this obituary I wrote for The Paper That Shall Not Be Named, over a decade ago (gulp!).

The Man Who Wasn’t There

I. About 23 times a year, by his count, the narrator of Nicholson Baker’s novel The Mezzanine wonders, “McCartney more talented than Lennon?” The comparative gifts of George Harrison, who died last week at 58, could hardly provoke similar debate, yet it was his relative proficiency that made him desirable to the nascent Beatles. He could build more chords than the elder John and Paul, and knew (unlike the former) that a guitar has six strings, not four. He impressed them by playing “Raunchy,” an instrumental hit (something in the manner of Duane Eddy). He would lose his virginity during their Hamburg residency, with John, Paul, and Pete Best in the room, pretending to sleep, surreptitiously watching. At 13 or 14, he inadvertently deconstructed his first guitar before he even had a chance to play it; another time, he contrived to build his own instrument—f-holes, varnish, and all—but it fell to pieces just as he began to string it.

II. The quiet one: George barely says a word in the short film Magical Mystery Tour. He barely moves while singing “Blue Jay Way,” seated and glazed, intoning “Don’t be long” so many times that the space between the final syllables seems to disappear. (Later he would admit: “As for me, I didn’t really belong; I was just an appendage.”)

Producer George Martin, in his memoir of the Pepper sessions, dubbed him the Third Man. Beatle John called him, not unadmiringly, “the invisible man.” Ringo felt George “didn’t want to be there” for the filming of A Hard Day’s Night. Despite George’s fleet-footed presence (and his winning coat-over-turtleneck ensemble—Harrison more attractive than McCartney?), his patent shyness makes him seem saturnine compared to his mates. “You can be replaced,” a professional trendsetter tells him. “I don’t care,” he replies.

He was wildly famous but private, keeping to his estate, the one with gardens and artificial lakes and a gnome-filled maze: the guitarist in his labyrinth. He was also nominally indistinct. Two names that people very close to me have confused him with since Friday: Harrison Ford, George Hamilton.

He would later recall one Liverpudlian entrepreneur, seen in childhood: “a bloke in handcuffs and chains inside a sack, trying to escape. There were always people doing that kind of thing—the Houdini syndrome.”

III. The first club the Beatles played in Hamburg was the Indra. In a few years Harrison would walk the razor’s edge in earnest. The unlikely catalyst for his deep attraction to Indian music and spiritualism was some sitar foolery in the decidedly unserious, mildly xenophobic Help! He was only 24 when he conceived the East-eats-West of “Within You Without You” for Sgt. Pepper, a decrepit 28 when he released his sprawling solo debut, All Things Must Pass.

At Strawberry Fields last Friday night there was the inevitable sing-along, under a bright moon and with small leaves falling slow as snow. Mourners’ voices found the middle range and stayed there: the faster songs like some parody of death metal, the ballads like anonymous plainsong. This ritual will happen twice again, little hedges against oblivion, before it all becomes the music of ghosts.