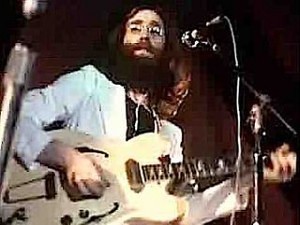 “When is a shaky, under-rehearsed performance even better than a polished, high-octane explosion by an artist who is beyond iconic? When it’s September 13, 1969, and John Lennon finds himself in the unenviable position of having to follow Little Richard at the Toronto Peace Festival.

“Big-time rock & roll fan John Lennon had been invited simply to host the show, but then at almost literally the last minute he decided to play it, and rounded up a few heavy friends — Eric Clapton, Klaus Voorman, future Yes drummer Alan White and Yoko Ono — to play as the Plastic Ono Band. Only thing was, that upset the billing – now Little Richard would have to play before Lennon. His gloriously massive ego wounded, Richard had to scorch the earth before the bounteously bearded Beatle, who had copped so much from Little Richard (among others) and gained copious honors, power, riches, fame, and the love of women in the process.” —Read all of “The Lennons V. Little Richard in Toronto, ’69” by Michael Azerrad